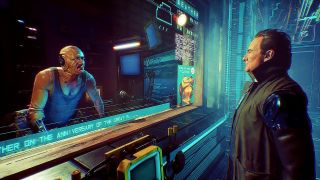 Guys, Observer 2 is (probably) happening. Earlier today, Bloober Team sent out a cryptic Tweet with an accompanying video that seems to be about a sequel to the cyberpunk space horror Observer. Check it out below.

The cyberpunk tag and overall vibe here couldn't be more Observer if it tried, but there's not much else to unpack - except for something a highly observant fan pointed out. Twitter user @Jameslyle96 roughly translated the binary code that's glitching across the screen, and responded to Bloober Team's post with "Daniel are you there?". Since Bloober Team responded with "Good Hacks!" it looks like James had the right idea.

Daniel is a reference to Daniel Lazarski, the original Observer's protagonist, voiced by Rutger Hauer. Sadly, Hauer passed away last year at 75, so it's unclear if he will be recast or if the sequel will feature a new protagonist who's perhaps searching for him. The source of the call, "ch120n 1inc02p02472d", is clearly a nod to Chiron Incorporated, the corporation/government organization hybrid that was at the center of the original game.

Observer was released for PS4, Xbox One, and PC back in 2017, with a 2019 Nintendo Switch port. Set about 60 years in the future, Hauer's Daniel plays a detective known as an Observer, who hacks people's minds in order to investigate and interrogate. The cyberpunk aesthetic coupled with the psychological horror made for a unique setting that was terrifying and entrancing.

No word yet on when Observer 2 will be released, but Bloober Team has put out a game a year since 2014, so if they keep up that impressive pace we could expect something this year.

Ready for more scary? Check out everything we learned about Half: Lyfe Alyx from Valve's AMA.