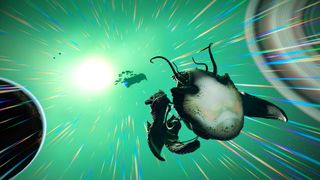 No Man's Sky is back with its latest content update. In patch 2.3, players have a number of new ships to discover, and wouldn't you know it, they're alive. Yes, really. Organic ships are now available, among a host of other content, including a new questline, Starbirth, which gives you the ability to grow your own ship from the earliest stages of development. That's right: little baby ship eggs.

Space NPCs also come to the game, giving you more reasons to stop and smell the stardust while you traversing the vastness of the cosmos. Rare new encounters will also pit you against mysterious new lifeforms which can yield some desireable new rewards.

In terms of quality of life improvements, one major change comes to multiplayer in the form of group warping, so you and your starfleet aren't inadvertently separated in the vastness of space. You can find the full patch notes below, straight from the game's official website.

To hear more about the latest update from Sean Murray himself, check out our recent feature where he talks all about little baby ship eggs.