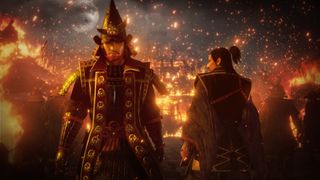 Nioh 2 creator Team Ninja has opened up on its desire to create a new series for PS5.

Speaking to Eurogamer Portugal, general producer Yosuke Hayashi is reported as saying, "I believe that a new console will bring new opportunities and we would like to create a new game, a new intellectual property for PlayStation 5."

We also got the chance to talk to Hayashi recently, and when we asked about the potential of PS5 when it comes to Team Ninja games, he told us, "'I'm sure it will bring a totally different level of gameplay from PS4… and it's our homework to make the most of it whatever it is."

It's not the only future Team Ninja project that's being teased this week, as Nioh 2's director Fumihiko Yasuda revealed how the team "hope to deliver some good news" on a new Ninja Gaiden game in the future.

The developer, whose work also includes the Ninja Gaiden series, Dead or Alive, and Marvel Ultimate Alliance 3, is currently busy putting the finishing touches to Nioh 2, which lands on PS4 on 13 March.

We recently got a chance to play the samurai sequel and came away impressed with how Nioh 2's improvements have come from fan feedback, "While it's not entirely shocking for a sequel to improve on elements that were criticized in the first game, it's refreshing to see how open Team Ninja has been in addressing complaints from the community." Considering some of the stuff we've already seen from Nioh 2, we can't wait to discover what Team Ninja has in store for a potential PS5 game.

There's plenty of games to be excited for this year, so check out the best upcoming games 2020 here.