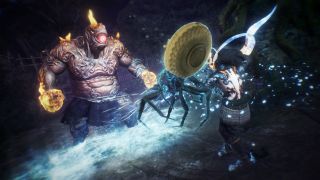 Nioh 2 isn't messing around when it comes to the sheer variety of Yokai demons you're going to have to battle. In the two and a bit hours I spent with this demanding new odyssey through Sengoku era Japan, I take on the large brutish Yoki with orange spikes sticking out of their shoulders, a floating head trapped in a wooden circle that spews fire at me (I didn't stop to learn its name), as well getting beaten to death by an Ippon-Datara. That last one is a monster that has a giant, singular leg, as well as one eye and a fantastic mane of hair. It's also a real arse, as I found out when I mistime a swipe, leaving my samurai open to getting his face smashed into the floor of the impeccably beautiful castle grounds we are duelling in. If variety is the spice of life, then Team Ninja has raided the rack and poured just about every seasoning they could find into the mix when it comes to these new enemies.

This new cavalcade of monsters is one of the most obvious and immediate ways that Team Ninja has looked to address some of the criticisms of the original Nioh. General producer Yosuke Hayashi explains through a translator that fan feedback has led to this immediate improvement: "One of the negative [pieces of] feedback we received for Nioh was the lack of enemy types. We had enough enemies, but a lot of feedback said once you learn the enemy's moves it can get quite repetitive."

He mentions that the team is aware of this and it plays a part in how it decided to approach variety in Nioh 2, explaining, "this time we introduced a lot of Yokais to make them look more powerful visually as well as do crazy moves and provide dynamic combat for a more challenging and intense game." If you played the original Nioh and are wondering how the foundations it set could get more challenging and intense, then Team Ninja has been listening to fans to help evolve their samurai soulsborne.

Like the original, fights in Nioh 2 are a dance between knowing when to be aggressive, managing your Ki stamina bar, and juggling between three different stances with your weapon. If that sounds confusing on paper, in practice it works surprisingly well when you're in full flow, smoothly gliding past an enemy with a dash, hitting them quickly, then regaining some Ki with a tap of R1 at the right time so you can recover some stamina and keep the attacks going. Nioh 2 adds an extra wrinkle into the mix this time as your protagonist has Yokai powers that can be used when you hold down the R2 button.

I get an early example of how these work at the start of the demo, as I make my way into Kitanosho Castle. The whole section has a welcome Onimusha vibe to it, with the castle burning around me, bodies strewn across the floor, and hidden paths you can find if you look hard enough. On the bridge outside, the first Yoki I encounter roars into life, and it quickly becomes apparent how the game is getting more challenging when a red flash shows it's preparing an unblockable attack. However, a quick press of R2 and Circle allows me to interrupt it, staggering the Yoki, and buying me a few milliseconds to get a swing of the new Switchglaive in. The dance that Nioh introduced has a few new moves, which only makes it more rewarding when you're in the zone with it.

Team Ninja has been open about how part of this satisfaction has come from fan feedback. In a recent blog post, Nioh 2's creative director Tom Lee wrote about how the team took feedback from last year's open beta and detailed the changes they made based off it. He wrote: "Needless to say, we are combing through every facet of the game, sharpening every detail to ensure that the final product is battle-tested for your enjoyment in the coming months." Those improvements included "adjusting the balance for all Yokai actions and strengthening several of the special moves and making them more manageable to use", according to Lee. Hayashi expanded on this, adding: "We were aware to a certain extent, some of the combat was quite unfair, so we made sure that the finished game will have more fair fights and people will feel right when [they] die."

Now, the section I played was mid-game and I had plenty of high level weapons, but the balance in combat did feel like it was on the right side of demanding. If I died, it came from me being cocky, swinging my weapon around without a care in the world, rather than the game breaking its own rules. That's not to say it's easy – you will die frequently – but it doesn't tip into punishing... give or take the miniboss who utterly pummeled me mercilessly and repeatedly at the end of my demo.

If all this sounds a little like FromSoftware's Sekiro: Shadows Die Twice, then that's because comparisons are easy to make between the two – on the surface, at least. Both have faster combat than most demanding action RPGs, they're set in the Sengoku period, and involve slicing your way through terrifyingly tough bosses. However, Nioh 2 has different fundamentals that make for a very different experience.

Sekiro's focus is in mastering the parry system, knowing how to break down enemies stamina so you can deliver killer blows. Nioh 2 is about developing a style of play based on the tools at your disposal. That includes a huge range of weapons, as well as various pieces of armour that give differing buffs. Where Sekiro is pared down to the essentials, Nioh 2 is a banquet of options that, with a fair bit of patience, lets you figure out what works for you.

Another fascinating way fan feedback from the original Nioh has shaped this sequel is the introduction of a character creator, which will let you craft your own protagonist. When I ask Hayashi about this decision, his answer is surprisingly forthright: "Character creation was probably the most popular request we had from Nioh. "[In Nioh], I thought that I would put players on the same page [as original protagonist William]. The players can explore Japan with William, or as William and that's why we didn't give William a strong personality or even [a strong] voice, as he didn't really speak either. And, in Nioh 2, it's the same approach really, so players can create their own characters and be themselves".

While William's Irish brogue certainly stood out in the original, this new approach gives players a more immersive role in the story. Considering the game's extensive customisation when it comes to armour and weaponry, it makes sense to give players more control over their protagonist as well, although it's hard to tell what impact it has on the story when the demo I played was in the middle of the game. It's a small tweak, and yet another example of how Team Ninja is refining the game based on what they heard back about the original.

Make no mistake, Nioh 2 isn't making these changes for the sake of it. It's still a tough game, designed for an audience who wants to overcome big odds and bigger bosses. While it's not entirely shocking for a sequel to improve on elements that were criticized in the first game, it's refreshing to see how open Team Ninja has been in addressing complaints from the community. When asked about this, Hayashi tells me it's crucial for the team to listen to players so they can make a game that they like. Again, no surprises there. But it's clear that Nioh 2 is laser focused on delivering for players who enjoy this type of challenge, as well as snagging new fans to boot. And after spending two hours taking it on, it feels poised to be the sort of herculean obsession that the best of these games are.