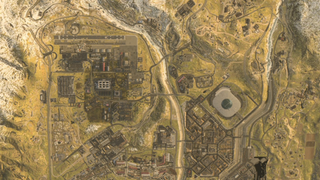 A map of the battle royale mode that is reportedly coming to Call of Duty: Modern Warfare has leaked.

A Call of Duty: Modern Warfare battle royale map has reportedly leaked with the game's latest update. Originally found by PrestigeIsKey, if a player COD casts during a private game on the new season 2 map Atlas Superstore, they can explore the area, and find a rough version of a possible new battle royale map.

This zoomed out map potentially reveals 15 different locations and 6 major points of interest in a new Modern Warfare battle royale.

The mode was first teased yesterday in a new cinematic that was released with Modern Warfare season 2. You can check it out below.

When signing into Modern Warfare after the gargantuan update (roughly 94GB on PC, 51GB on PS4, and 68GB on Xbox One) players reported a greyed out option on the main menu labeled ‘Classified’ which left us all wondering if it would be the highly anticipated battle royale mode.

Call of Duty Modern Warfare season 2 launched last night, and came with a slew of new content. This included Lieutenant Simon "Ghost" Riley as a new operator as well as four new maps. Bazaar was added as the new Gunfight map, Zhokov Boneyard as the new battlefield for the Ground War game mode, with Atlas Superstore and fan-favourite Rust as new 6v6 multiplayer maps.

New weapons also dropped in the new season, a new rifle, the GRAU 5.56 and sub-machine gun Striker 45, with a mystery sidearm coming at a later date.