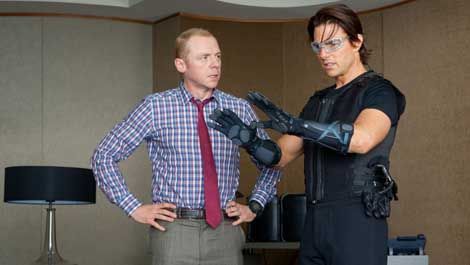 Four is the magic number in the latest Mission: Impossible , and not just because it’s the fourth instalment in Tom Cruise’s Bond-aping spy franchise.

No, it’s also the number of protagonists in Brad Bird’s zippy caper, the Pixar dude having taken a cue from his own Incredibles in assigning his lead a surrogate family of secret-agent helpmates.

Given the lukewarm public reaction to Cruise’s recent solo vehicles, it makes sense to position people around him to pick up the slack – literally in the case of the film’s main set-piece, a vertiginous dangle outside Dubai’s Burj Khalifa.

And if the result means Cruise seems occasionally short-changed by his own production, it’s a price worth paying in a fast-paced, globe-trotting adventure that offers blasts, brawls and buildings of equally spectacular scale.

Bird sets the tone early with a Russian prison break that combines Dean Martin, a Great Escape gag and even a nod to Cruise’s height within one playful, pre-credits sequence.

In Bird’s eyes, getting this quartet to work together as a team after they’re disavowed in the wake of a billowing Kremlin explosion is at least as important as them foiling mad extremist Michael Nyqvist and his shapely blonde assassin (Léa Seydoux). But then this is a very different Mission to the ones that first revisited the 1960s TV series.

Its light, zesty touch is a marked contrast to the multiple treacheries of Brian De Palma’s franchise-starter (1996) and the slo-mo excesses of John Woo’s part two (2000).

Racing from Moscow to Mumbai via eye-catching stopovers in Budapest and the United Arab Emirates, Protocol only disappoints in failing to give Renner’s enigmatic ‘analyst’ Brandt a back story deserving of his initial air of mystery.

It’s a shame too that Pegg’s puppyish enthusiasm as Benji the techie isn’t always well served by the script, though he still scoops the best one-liners. And then there’s the surprise-strewn but somehow flat-footed coda to the all-action climax.

Still, these are minor niggles in a film that delivers two hours plus of thrilling blockbuster entertainment with a goofy grin on its face. Not only that, but it scores a first by staging a punch-up in an automated car park.