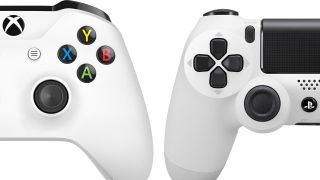 Sony. Obviously it’s Sony. Let’s get that out of the way right now. But actually, before we go on, let’s stop to retcon the ‘obviously’ out of that second sentence. It’s not quite right. Because while Sony definitely delivered the most arresting line-up of games – in fact probably a couple of the most exciting titles of the show so far - and did so with immense confidence and clarity, the situation isn’t quite as straightforward as ‘Sony had better games’. There’s a more nuanced comparison to be drawn, taking in clattering tactical mistakes on Microsoft’s part, and canny strategy – evasion even – by the house of PlayStation. But let’s start with the surface stuff.

Out of context, Microsoft did not have a bad show. Games-wise it was a solid line-up indeed. The playable component opened strong with Gears of War 4, The Coalition presenting a very confident revitalisation of a series that had, by the end of last generation, grown somewhat bloated, and tired through repetition. It fulfilled the promise of a lean, vital return to the series’ aggressive, oppressive roots, while also providing enough current-gen polish and creative bells and whistles to feel entirely modern. It looks fast, without losing the tactical edge. It looks spectacular, without losing the intimacy. It was a perfect debut that established Gears 4 in exactly the manner required.

Recore now looks a whole more more exciting than it did last year, its new, high-contrast art style providing an enticing compliment to the game’s action-exploration platforming, which looks to blend dynamic DmC’s traversal with Rachet & Clank’s shooting. Scalebound is now a far more convincing slice of classic, high-gloss Platinum, its breathless Devil-May-Cry-meets-The-Last-Guardian action blending grand scale combat with seamless, scripted cinematics to giddy effect. And Sea of Thieves – despite being demoed amid a flurry of standard-issue Microsoft ShitBanter™, seems to be exactly the kind of creative, fun, AAA Rare project that we’ve all bemoaned the lack of for far too long. And while at this point its formula is too polished to really put a foot too wrong, Forza Horizon 3 was a solid reminder that the series is still as exciting and classy as any other big budget racer out there.

In the third-party realm, Microsoft aligned itself with some sensible choices. Getting the first big Final Fantasy 15 demo was a smart move in diversifying the Xbox platform’s personality, as was the Tekken 7 demo featuring Street Fighter’s Akuma – a decent shot at making people forget, albeit briefly, that Street Fighter 5 is console-exclusive on the PS4. A showing for Battlefield 1 was also a good move in light of Call of Duty’s ship-jump to PlayStation tie-ins, despite the bulk of the game’s hype already having been dropped at EA’s press conference. And on the indie side, while much of Microsoft’s entirely respectable line-up flew past in a montage, We Happy Few and Inside were very well advised picks with distinct and affecting artistic scope.

In all then, a very decent Microsoft line-up, albeit one very much in line with last year’s philosophy of consolidating for the known fanbase, delivering more of the tried-and-true safe bets, rather than pushing in any new directions.

But it wasn’t just about the games. In fact, ultimately the games were overshadowed by Microsoft’s hardware announcements. And this is where things start to unravel somewhat.

New, slimline Xbox One S? Great idea. We’ve been crying out for an Xbone that doesn’t look like an ‘80s VCR since the machine was first revealed. The 2TB hard drive is also entirely welcome, as is the support for 4K video. It was a smart thing to start with, immediately getting the audience excited about the Xbox One as a thing before the games even started to flow. That kind of subtle psychology is important in these shows. And it works.

But what’s also important is making sure that once you’ve cultivated such a holistic, platform-wide buzz, you don’t neatly bludgeon it to death within 90 minutes. And that’s exactly what Microsoft did by prematurely announcing Project Scorpio right at the end. “Look! Look at this sexy new, 40% smaller, tuned up Xbox One”, Microsoft said. “Now forget it, because it’s obsolete. Also, did we mention enough times that all of our biggest ‘exclusive’ games are also coming out on PC? We’ve mentioned cross-play every chance we’ve had, but let’s just emphasise that one last time.”

It was a weird, weird line to take, and led to what was, once the glittering hype dust settled, a weird, weird conference. In terms of the tone of the presentation, Microsoft’s show was nothing but a celebration of the Xbox One. But in terms of the content behind that bluster, it was tantamount to pushing the platform under the rug and stamping on it until flat and forgotten. Xbox One hardware sales are going to be very interesting to observe over the coming months.

In terms of tone, Sony’s show was a binary contrast. While many loved the fast, lean, ‘All games, all the time’ delivery – Sony’s conference was effectively a gigantic, air-punching trailer reel, punctuated by brief, occasional addresses – I wasn’t a fan. While there was no denying the quality of the show’s content, I found the delivery a little cold and distant, lacking the human factor and strategic context that I like to come with these things. That will be a little more important later on, but for now, let’s get on to the game content, because ye gods. Sony didn’t just crush it. It crushed it into charcoal, then into diamond, and then buried it deep for future generations to find.

That sentence will also become slightly more relevant later, but I’ll stop these enigmatic teasers now and crack on.

God of War was a brave, blindsiding, ‘everything must go’ reboot that typified exactly why Sony’s first-party content is so compelling. A total disregard for the past, and a focus only on ‘What should this game be now?’, seemingly fueled by a trust in its long-term fanbase to get on board. Gears of War 4 was an impressive refresh of a series with the same initials, but the focus of Sony’s Norse reboot on relationships, slow-burn storytelling, detailed world-building, and a totally new, character-driven approach to combat, delivered a far more future-looking response.

An unexpected companion piece was Sony Bend’s downbeat, backwoods zombie horror Days Gone. Again, trusting the game to speak to players in its own right, the game’s two demos evoked as much influence from The Last of Us’ creative maturity as God of War (surprisingly) did, the latter in particular managing to turn the age-old trope of frantic zombie carnage into something genuinely dramatic and affecting, while also feeling incredibly dynamic. Microsoft garnered whoops for Dead Rising 4, but given the choice between another bout of open-world, corpse-killing slapstick and Sony’s – once-more – forward looking, more modern treatment, I know which game I find more compelling.

Hideo Kojima’s appearance, with the arresting reveal of his new, Sony-published game, Death Stranding, was so big as to almost not need covering. The stark, surreal, profoundly affecting sequence of images Kojima and Sony chose to show were a tactical nuke of intent. The industry’s most celebrated, experimental, AAA auteur – possibly the last of his breed, and recently under well-documented threat by his now-ex-publisher – making a glorious, belligerently artistic return, by dropping a lunatic art house movie with massive, AAA production values, paid for by a first-party.

As a distillation of Sony’s ideology, it was as pure as they come. Subtextually, the sense of Sony as the saver of heroes, the rescuer of creative pioneers in the face of corporate indifference, was undeniable, right down to Koj’s entrance on a celestial bridge of light. Sony knew the narrative. Sony knew that everyone else knew the narrative. And it made sure to give the story the happiest, most dramatic ending it could.

And in terms of third-party alignment, Resident Evil 7. Sweet Jesus, Resident Evil 7. Implicitly compounding the subliminal message of ‘Sony and Kojima’s artistic power vs. Konami’s corporate drudgery’, the reveal of Capcom’s horrendous, disturbing, distinctly Silent Hill reboot of its long-maligned shlock-horror series played right into the story of Konami’s cancellation of Kojima’s own Silent Hills project. And if you think that the delivery of an hour-long, playable demo to PS Plus subscribers immediately after the conference was in no way a move to echo PT’s own furnishing of the same at Gamescom last year, then, well, you’re just wrong.

But even with all of this taken out of the context, the simple fact that Sony presented itself as the envoy for yet another, long-wanted, creatively-minded refresh of a fan favourite series cannot be ignored. That was Sony’s masterstroke of positioning this year, and it managed to achieve it with less pomp and bluster, and seemingly less effort, than its similar move last year with Shenmue 3, Final Fantasy 7, and The Last Guardian.

That talk of diamonds waiting in the ground? The snarky could argue that several of Sony’s first-party big hitters are a long way from arriving. But that would be to miss the point of E3. The point is not to deliver hot new games for the coming weeks. E3 is for paving out an ideological path of culture and promise for your platform, creating an ideal for your players to invest in. Sony has become a master of that, and this year’s execution was just as effective, and perhaps even more clever, than its performance in 2015.

On the subject of slyness of strategy though, there’s one piece of misdirectional sleight of hand that can’t be ignored. For all of the trouble that Microsoft caused itself by championing 'most powerful console ever', Project Scorpio, while still trying to exalt the Xbox One, we know that Sony is planning to do something similar with PlayStation Neo. The same problems that are now befalling Microsoft could very well easily hit Sony over the next year. But Sony knew that E3 was not the place to invite that trouble. E3 is the place to show yourself at your most glorious and triumphant.

That, perhaps, is why its presentation was so devoid of executive chit-chat, and talk of wider platform strategy. To bring in those elements – in the midst of already disruptive VR talk - would be to force a conversation that it’s not yet wise to have, a conversation that Microsoft was all-too eager to start, perhaps in a naïve bid to beat Sony to the punch.

I speculated last week that either company might choose to hold out on a new hardware reveal, in order to force the other side’s hand, and perhaps re-plan accordingly. It seems that Sony did exactly that. But that it did so while delivering such a constant, well-calculated barrage of non-stop wonders – thus providing a clever and effective distraction from the potentially tricky bigger picture – is the real tactical masterstroke at the core of all of the excitement.