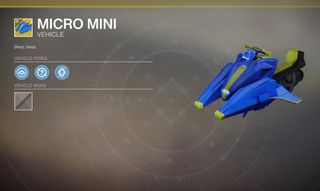 The Destiny 2 Solstice of Heroes 2019 event has begun, and on top of some sleek armor and summer-themed Ghost accessories, it's introduced quite possibly the best sparrow in history: the Micro Mini Destiny 2 Sparrow.

As its name suggests, the Micro Mini is an itty-bitty sparrow that looks like one of those coin-operated rocket ship rides you used to see in front of shops. It is hilariously, amazingly small. Watching a grown-ass Guardian ride it, especially a Titan with oversized armor, is pure joy, and I swear it's faster than other sparrows, though that may just be a trick of the eyes due to its small size. In any case, you're going to want this hotrod for yourself. Luckily, it's currently very easy to get the Micro Mini Destiny 2 Sparrow.

Unlike last year's Solstice, there are no Solstice Engrams this time around, but at the same time all of the cosmetics available this year can be purchased for Bright Dust or Silver. Different Solstice items will be available every week via the Eververse store's Bright Dust page, and as luck would have it, the Micro Mini is available this week for 2,500 Bright Dust. It'll be available until reset on Tuesday, August 6, and there's no telling if it'll appear in the Bright Dust listings again before the Solstice ends on August 27, so buy it while you can get it without spending real money.

If you're short on Bright Dust, be sure to grab and complete all the Eververse bounties you can, and throw on an EXP-boosting Ghost Shell to increase your Bright Engram turnout. You won't get any Solstice items from Bright Engrams, but you can at least get items you can break down for Bright Dust. Speaking of which, if you've got any unwanted Eververse items kicking around 0 armor, ships, shaders, etc. - go ahead and shard them too. You may as well get some Dust out of them ahead of the big Eververse changes coming in Destiny 2 Shadowkeep.

In case you were wondering, yes, Lord of Wolves was finally nerfed.