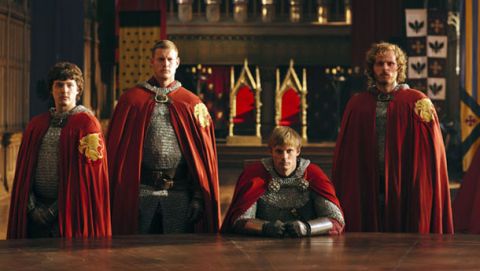 “Oh Great Dragon! Hello? Great Dragon? Where are you? I come once more in my quest for knowledge about the next episode of Merlin. I think I’m off on a better footing this week, looking at the title. But I must know more! Hello…?! Damn. Nothing. The cave’s completely empty. He must have…”

“You nearly made me poop my noncing britches. What the hell did you do that for?”

“ARRRRGGGHHHHH! No don’t say that again.”

“It’s all part of the service. I’m getting you in the mood for this week’s episode.”

“Oh, I see. It’s a scary one, is it? And don’t go BOO! again or I’ll stick this sword somewhere that’ll make you jump.”

“I’d like to see you try… as Arthur says to Merlin at one point.”

“Oh God, is it going all slash-baity again?”

“Hmmm, now you mention it, yes. There’s a certain artifact Arthur uses that has Carry On pun-potential written all over it… in ancient English, presumably. But at the point he says, ‘I’d like to see you try,’ it’s just a lovely character scene between Arthur and Merlin, of which there are many. There’s a warmth and watchability to their relationship that always comes across well in a Howard Overman script.”

“He does indeed, and this is another typical Overman episode. Although a lot spookier and creepier than usual (it uses haunted house tropes with energetic glee) it has few guest characters, is mainly set in the castle and has some very witty lines. It’s not a major episode in terms of the arc plot, but it does have moments of true resonance. Oh, and one guest star is particularly good.”

“My lips are sealed.”

“It could be a double bluff. This is a show about magic. Who’s to say it isn’t just a shapeshifter?”

“I hate you. You’ve made me doubt myself now.”

“Doubt is good. It keeps you on your unwashed and rather smelly toes. But we both know of whom we speak, and whether he’s real or not, the actor playing him is utterly, utterly magnificent. A stunning performance. He brings the best out of Arthur and Merlin too: they both have some very powerful scenes – both confrontational and soul searching ones.”

“Much magic this week?”

“Hmmm, a bit. Merlin still seems to be rationing his abilities a little too much but he has a couple of great moments letting rip. The episode does make you wonder quite what Arthur’s attitude to magic is now, though… Oh, and one last thing.”

Merlin “The Death Song of Uther Pendragon” airs on BBC1 on Saturday at 8.25pm