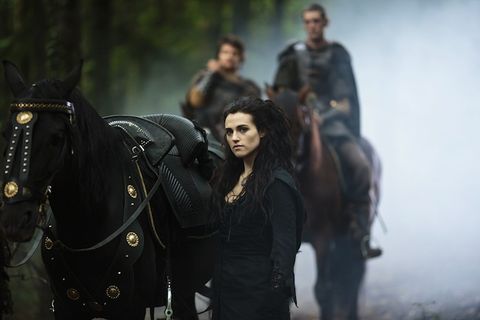 As Merlin enters the beginning of the end, once again our young seeker of knowledge makes an expected journey to the cave of the Great Dragon to see if he can tease any clues about the next episode from the inscrutable reptile’s mouth… Here’s hoping!

“At bloody last. I thought you’d never show up.”

“I certainly am. I cannot wait to tell you all about the next episode, young stripling.”

“Oh good. Does that mean you’ll be a bit less cryptic than usual?”

“Well, there’s no harm in asking. Why are you so excited about this week’s episode then?”

“Because it features a cameo appearance of rare depth and resonance. A performance so stunning, so stirring, so emotionally hard-hitting it will make your toes tingle. A sample of acting so exquisite…”

“So you fly in, deliver some meaningless drivel then fly off leaving lots of unanswered questions?”

“Well, that. But not just that. My acting talons… sorry, talents were stretched like never before. Though my acting talons were good too.”

“Glad to hear it. I expect you’ll be showered with Baftas.”

“Sarcasm does not suit you, young scoundrel.”

“Odd, I could have sworn it did. So, apart from your appearance, what can you reveal about this episode? Does it feel like the show is coming to a climax?”

“Indeed it does. Indeed it does. In fact, in some ways, this feels less like a stand-alone episode and more like the first part in a four-part finale. You can see the elements of the plot coming together.”

“Oh, it is. To be fair, there’s not a great deal of plot, but there are a great deal of portentous, significant, ‘OoooOooh!’ moments. The tone is tense. The stakes feel like they’ve been raised. Morgana is more callously ruthless than ever before. Guest characters – and very good they are too – take enormous risks. And it all centres on Merlin, who sticks to his guns on a number of levels. It’s an enormously affecting episode, superbly directed and seeped in a mythic atmosphere of supernatural unease.”

“There’s a lot of magic going on, and not just the usual magical power punches (anyone else starting to see phantom energy bars at the top of the screen?). The magic GPS is back and some pyromancy. Oh, and a magical affliction that’s actually fairly gross.”

“Gwen and Arthur are making up for lost time after her possession experience and are exceptionally lovey-dovey. The knights get a decent amount of action. Gaius goes behind someone’s back with the best intentions. Mordred continues to be a curate’s egg. Perhaps more so… And that’s your lot.”

“I bet you are the stand-out moment in the episode!”

“And I’ll vote for you in the next SFX Best Dragons or Best Cryptic Mentor poll. You’re so much better than Yoda.”

“Ah, flattery will work with me. Okay then, here’s your quick-fire round: the knights play basketball to wind up Gwaine; Merlin forgets the flowers; Gwen knows the truth; Merlin draws a ’70s mural; Morgana issues a very chilling threat; Merlin is very forgiving; there’s lots of random violence towards trees; a knight (not Gwaine) has to admit to an embarrassing affliction; there is a faceless threat; the last line is a cracker.”

“And one last thing.”

Merlin “The Kindness Of Strangers” airs on BBC One on Saturday 8 December at 7.55pm