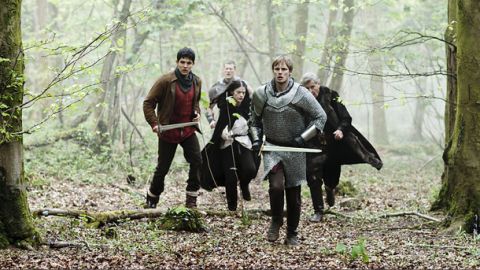 In a cave, a dragon waits to give a young man a glimpse into the future of… Merlin .

“In the land of myth and the time of magic the destiny of a great kingdom rest on the shoulder of a young man. His name is… Oh hang on, I’m having a senior moment…”

“Nope, that’s not it. I’m sure it begins with M and scores eight at Scrabble…”

“No, I’m summoning you, Great Dragon.”

“And I know you can use it in Scrabble, because it’s not just a proper noun. It’s some kind of creature as well. An otter, perhaps?”

“Oi, it’s me. The young spoiler seeker from the forest of Yzlaquaxaj.”

“Blimey, that’d be a cracker in Scrabble. Is it only a proper noun, or is the forest named after something? A type of moss? A variety of herb? A breed of witch?”

“I dunno. It took me until I was 13 before I could even pronounce the damned place. Anyway, it’s Merlin.”

“The one you were talking about. Density, kingdom, shoulders, blah, blah, blah. Surprised you forgot. You say the same damned thing every week.”

“Oh, I’ve seen many things, young seeker of trivia. Attack ships on fire off the shoulder of Orion. I've watched c-beams glitter in the dark near the Tannhäuser Gate…”

“What, in the next episode of Merlin ?”

“No, I think that was Blade Runner.”

“Wait a few centuries. You’ll love it. Anyway, this Saturday’s Merlin . As ever, I cannot give away spoilers, but I can tell you this. Morgana has a dodgy makeover.”

“Is she a major part of the plot?”

“Why are you laughing?”

“Because I made a joke that’ll only make sense after you’ve seen the episode. Comedy is about timing after all.”

“I need more? What kind of episode is it?”

“It’s pretty intense from start to finish. There’s not a great deal of plot but there’s a really doomy atmosphere. And it’s a major episode in the development of Arthur’s respect for Merlin. Lots of talk about politics versus revenge. Major sword fights. A bit of magical combat (though not nearly enough – I like a good bit of magical combat me). There’s lots of running around the woods. There are a couple of returning characters who interact in an unexpected way. No magical creatures, besides my usual voiceover, of course.”

“Anything to look out for?”

“Merlin gives Arthur a direct order… and rather enjoys it. Arthur admits something to Gwen he doesn’t want her telling anyone. Gwaine has to play babysitter. Somebody other than Merlin or Morgana does the glowy-eyed thing. Gaius joins the away team, for no obvious reason other than he comes in handy for the plot… but it’s nice to see him out and about. Somebody gets an unexpected clean bill of health and somebody else unexpectedly joins the fray.”

“And I suppose that’s all you’re giving me?”

“No. I have one more thing to give you,”

“No old people reveal something of vital importance with their dying breath. Somebody clearly didn’t get the memo.”

“How old are you Great Dragon?”

“As old as my tongue and a little bit older than my teeth. What an impertinent question. I’m a mere whippersnapper when it comes to Great Dragons. Just ask… oh what was his name?”

“Hang on I’ll write it down for you…”

Merlin “Another’s Sorrow” airs on BBC1 on Saturday at 8.20pm.