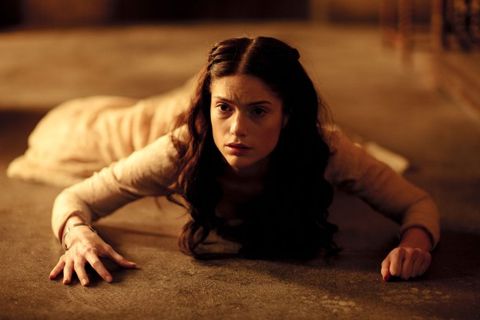 THE ONE WHERE The return of old ally Mithian of Nemeth spells (pun intended) trouble for Arthur because she's under the influence of a vengeful Morgana. Arthur rides out to save Mithian's father Rodor... but it's a trap! Obviously.

VERDICT So much of this episode begs the question "why?"

Why does Morgana need to physically coerce Princess Mithian when she already holds her father as leverage? Knowing this, and therefore acquiescing up to a point, why does Mithian try to escape every now and again? If this is so important to Morgana, why does she fall asleep while supposedly guarding Mithian - with the key clasped on the table in front of her? Why does the king ride out personally to try and rendezvous with Mithian's father, couldn't his knights just go and rescue him from the border? Since Mithian is following orders because her father is hostage and since she has a magical binding on her wrist and since the plan is to draw Arthur out of Camelot to kill him, why does Morgana need to personally infiltrate the castle too? But given that she does successfully gain access to the palace in her (frankly not that convincing) disguise... why not just use the opportunity to kill Arthur herself? And come to think of it, if Odin just wants war with Camelot, he doesn't really need Morgana's help either; why are they working together?

Fortunately it's rescued from averageness by (a) having more magic in it than usual and (b) having a lot to say about Merlin's more confident relationship with Arthur. After the pace and tension of previous plots this week could have been a little tiresome but it picks up towards the end with some smart characterisation and a couple of great fight scenes.

Magic has been underused so far in 2012, but here we see Gaius resort to using sorcery to save Merlin, doing the whole "glowing eyes" trick that we don't usually see beyond Merlin and Morgana. "She didn't count on a sorcerer of your power, did she?" chuckles Merlin, reminding us that old Gaius is quite the wizard himself. Morgana's Vader-like Force choke is a handy spell - why she doesn't she actually just kill him? (Sorry, I'll stop with all the "why?" questions) - but it's nothing to the earthquake Merlin conjures up! And Merlin proves to be a warrior as well as a warlock, mixing magic and swordplay in a way that almost reminds me of Ruadan's ninja skills from the start of the series.

I don't quite buy Arthur's desire for revenge on Odin as such a great motivator that he can't see the foolishness of riding out of Camelot. When Guinevere says "One small slip and Camelot could find itself without a king..." she's making a very wise point that others, including Merlin and Gaius, all reiterate. What's telling at the end of this episode is that Arthur reveals to Gwen how much he values Merlin's advice. Sure, it's done as a joke: "It turns out he's not entirely stupid!" But the sense that Merlin has the capacity to advise his king is made very clear, and Merlin himself must be aware of his growing influence. He's very bold when he blocks Arthur on his way to Mithian - did you notice that he questioned the king by just saying "Arthur?" This is a dialogue between friends, not a servant and his master.

NITPICK Where did Merlin suddenly get a sword from?

IT'S WOSSERNAME AND WOSSISNAME TOO Is Merlin simply recycling guest stars now? We haven't met anybody new since the opening two-parter. Nonetheless, the folk today are great actors. Princess Mithian was of course played by Janet Montgomery from Human Target and Black Swan , who we first saw in Merlin back in "The Hunter's Heart" . Her father Rodor is played by the legendary screen actor James Fox (uncle to fellow Merlin performer Emilia Fox and father-in-law to Doctor Who alumna Billie Piper). Odin is played by Fintan McKeown, known to sci-fi fans as Michael Sullivan from a couple of episodes of Star Trek: Voyager and more recently as Amory Lorch from Game Of Thrones .

TRIVIA [EDIT: Reader DoriCzerna has pointed out that the correct Hungarian for "German" would be német . That's me told.]

IN THE DIRECTOR'S CHAIR Ashley Way (that's a bloke, by the way) has director credits from Torchwood , Doctor Who and Sarah Jane plus two Merlin eps back in 2010.

THE KNIGHTS I'm loving Gwaine's little grin to Elyan as he runs up and rescues the knights.

SLASH BAIT Precious little compared to last week ; although Arthur's growing respect for Merlin and the rather sweet deepening of their relationship is something to play with. I was quite tickled by Merlin giving Arthur an order to stay away from Mithian in that early scene.

HISTORY LESSON Odin is familiar to most as the name of the chief Norse god. Why have the Merlin creators named one of the kings of Albion after him? Perhaps they're inspired by the fact that many royal genealogies of Anglo-Saxon kings claim to trace their lineage all the way back to "Woden" (the Anglicised form of Odin).

LMAO Gwaine knocking out one of Odin's knights who's having a wee up against a tree. Priceless.

THE TITLE "On Another's Sorrow" is a poem by idiosyncratic 18th century writer William Blake, exploring empathy and compassion, something relevant to the end of this tale and Arthur's realisation that both he and Odin have a reason to understand each other's pain.
"Can a father see his child
Weep, nor be with sorrow filled?"
(A dual meaning with the title might also give us a clue to Morgana's spiteful mind state - the experience of "joy for another's sorrow" is a sin defined by medieval writer Gower in the Confessio Amantis as a sub-set of envy.)

BEST LINE
Arthur: "We cannot let it end like this. The blood will never wash off."