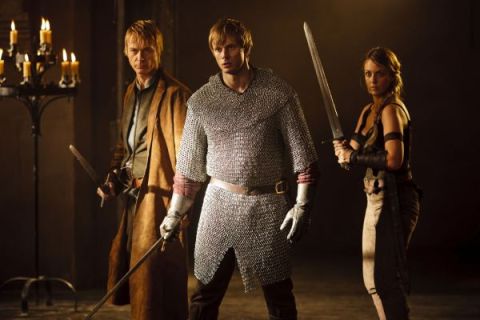 Arthur and Guinevere face their destiny as the battle to retake Camelot begins.

THE ONE WHERE With the help of the Great Dragon, and some deft Merlin magic, our heroes defeat the villains and retake Camelot. Guinevere finally becomes queen.

VERDICT Although it has its flaws, what I like about this finale is the way it properly concludes several of the series' arcs, embraces the Arthurian "sword in the stone" myth (with a twist) and establishes a new status quo for next year.

Starting immediately from the point we left off last week - so much so that this feels like it would have been better as a two-hour special all shown in one go - our heroes flee the village of Ealdor and head into the woods. And, thank goodness: after eight episodes without a dragon, Merlin summons Kilgharrah in the first two minutes. You have to chuckle at Agravaine's face as he swoops down. "Take cover!" indeed.

Ah yes, Agravaine. I'm going to miss him. The confrontation between him and Merlin is superb - better, I think, than the final face-off with Morgana. It's a great performance by both Nathaniel Parker and Colin Morgan. Merlin is badass when he doesn't have to hide who he is. He calmly tells Agravaine and his men not to proceed, although clearly distressed by the idea of hurting them. When threatened with his life? "I don't think so," he says. You can see he is becoming a commanding, confident figure, aware of his power.

You know you're in a grey moral area, though, when Agravaine starts being impressed with you; he has a good point about how much Merlin has been deceiving Arthur all these years. "We're more alike than you think." It's true they've both spent all their lives hiding their true nature from the young king (something that's obviously on Merlin's mind later when he talks to Arthur in the forest).

Notice how quiet the scene is. There's no music until after Merlin air-punches Agravaine to death, and the silence adds to the tension. It was in self-defence but Merlin is clearly not happy - look at Morgan's face as his character walks away. But I suppose there was no way Agravaine could carry on in the series once he knew Merlin's secret. It's been a truly watchable performance all series from Parker (something writer Paul Cornell acknowledged in his blog about the year's TV ) and next year will feel smaller without him.

Once again, Merlin takes the Arthurian legend and bends it into a fresh shape. This episode, Merlin creates the myth of the sword in the stone as a story to motivate his king. It's hilarious when Arthur challenges Merlin's "history" lesson. "Are you making this up?" says Arthur patronisingly. "I've never heard so much rubbish in my entire life." The scene itself, with its rising music and lens flair, is epic - even if it's a little contrived (did Merlin really convince all those people to recognize this hastily made-up story?).

The build-up to the assault on Camelot is more exciting than the early parts of the battle. Percival throwing the guards back out of the gate is a curiously cheap, slapstick visual joke against the gravitas of the situation. There is some wonderful sword combat, but once the battle gets under way it feels more like a playground scrap than a mighty siege, where everybody seems to be grinning at each other and calling out “for the love of Camelot!” before making ill-conceived dashes. It doesn’t feel convincingly violent until the clash with Helios in the main chamber. Arthur takes a beating from Helios and is only rescued by Isolde - who gets a noble warrior’s death. I’m pleased that after all this time, and a series spent mostly in the background, Gwen gets to pick up a sword too, facing off against Morgana. The meeting permits her to ask a simple question - “Why do you hate me so much?” It’s short-lived, though, and Merlin arrives to save the day; fitting, since he’s the real hero of the tale and Morgana’s mortal enemy, but it would have been an interesting development to see Gwen take her revenge on the villain.

I salute the creators for not taking the easy way out and have somebody find the enchanted bracelet that made Guinevere betray Arthur. It made Arthur and Guinevere’s confrontation in the woods (“Everything I cherished between us has gone”) and their later reunion things that they were able to work through and not just a convenient fix. It seems Arthur will start the next series - renowned sword in hand and prophesised queen by his side - as the king of legend.

Don't they all look smart in their finery at the wedding? Okay, for all you Colin Morgan fans, here's a gratuitous picture of Merlin at the ceremony to round off this year's reviews. Thanks for reading! See you next series.

LMAO When Gaius and the captured knights are finally rescued:
Percival: "Are you alright?"
Elyan: "I've been locked up with Gwaine! For a week!"

SLASH BAIT Very little in this episode although there are a couple of endearing scenes which confirm Arthur's affection for his servant. The concerned look he gives when Merlin heads back to create a diversion in the tunnels, for instance, even if his "I couldn't bear to lose you" line is comically undermined by the chucklesome "don't be stupid!" afterwards.

HIGH STAKES Anybody else think that when Morgana hands Gwaine a wooden dagger, it's actually a crucifix/stake-type weapon? Thought for a minute he might be pitted against vampires.

MORGANA AND AITHUSA So that's where the baby dragon went! But how did Morgana whisk herself off to the woods? Didn't Merlin drain her of magic? (If it was Merlin's magic which teleported her out of Camelot, you have to wonder why he didn't just kill her like he did with Agravaine.)

TRISTAN AND ISOLDE Although Miranda Raison and Ben Daniels are great actors, their characters are a wasted opportunity. They hardly do anything, certainly little that required them to be two of the greatest lovers from mythology. Apart from delivering a cheesy line about never giving up hope on love, their role is to (predictably) join battle at Arthur's side once he's proven what a nice guy he is. They fight well but Isolde's death isn't the moving moment the script-writers probably hoped, because we hardly know her. Their intense love does, at least, act as a mirror for Gwen and Arthur who are clearly still looking at each longingly throughout.

THE LEGEND Merlin and Arthur discuss how Brute was the legendary first king of Camelot. Many of the earliest "histories" of Britain claim that our nation gets its name from "Brutus of Troy", a descendant of the famous Aeneas who survived the Trojan war.

BEST LINE
Arthur: "Maybe I don't deserve to be king."
Tristan: "That's alright, because you're not. Not anymore."

This was the last of BBC One's episodes this year. American viewers should look out for Merlin on Syfy from Friday 6 January.

Read our interview with the showrunners