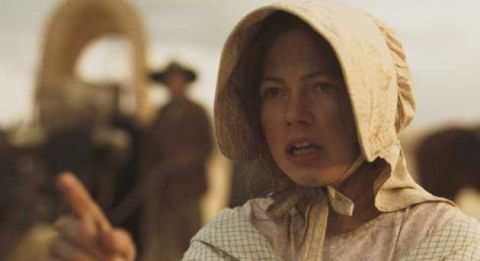 Over the last few years Kelly Reichardt, along with her regular screenwriter Jon Raymond, has quietly been building an impressive body of work.

This, her fourth feature (third with Raymond), reunites her with Michelle Williams, the star of Wendy And Lucy, and returns to the setting of Old Joy, the Cascade Mountains of Oregon.

But this time Reichardt’s delved into the past and come up with a western – one that, while it nods to the classics of the genre, coolly overturns most of their basic conventions.

As the opening embroidery-stitched credits tell us, we’re on the Oregon Trail in 1845.

Three young-ish couples, plus a 10-year-old son, are being led through the wilderness by Stephen Meek (Bruce Greenwood, with a luxuriant foliage of shaggy beard), a mountain man who claims to know a cutoff (ie shortcut) through the mountains. But it’s evident that for all his bluster (“We’re not lost. We’re just findin’ our way”) that he doesn’t.

Then they capture a lone Cayuse Indian. Meek wants to kill him, but Solomon Tetherow (Will Patton) and his wife Emily (Williams) believe he can lead them to water. And gradually Emily finds other reasons why he should be allowed to live.

Shooting mainly in mid- and long-shot, Reichardt locates her pioneers in the vast indifference of the landscape, emphasising their isolation and vulnerability.

Repeatedly, we see the men conferring together at a distance, their words only intermittently audible; the women, who are cooking, cleaning, nurturing and keeping the show on the road, are excluded from all decisions. But when it comes to a climactic showdown, it’s Emily who takes a stand.

The style is austere, minimalist even – for long passages there’s no dialogue, Jeff Grace’s score falls silent, and we’re left with the sigh of the wind and the squeak of a wagon wheel.

But the slow build-up of tension is inexorable. And in the end, there are no easy answers.