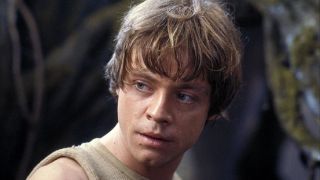 Close your eyes. It's the summer of 1977, and you are Mark Hamill. Star Wars has just come out, and your life is about to be changed forever. But what if someone else had gotten the part? Speaking to Total Film about Star Wars: The Last Jedi, Hamill - the real, present-day Hamill that is - admitted that he had never before seen the audition tapes for the first Star Wars until recently, and remarked on how different (or not different) the saga could've been if he hadn't gotten the part.

Subscribe: Sign up for a monthly subscription to Total Film magazine and get news and interviews on all the biggest sci-fi entertainment delivered straight to your mailbox and/or mobile device.

"During Force Awakens, I was at the house, and the whole family went shopping or something. It was a Saturday afternoon and I was on the internet. I was looking at Laurel and Hardy clips or something. And then I came across Star Wars auditions. Now, they’d been out as extras on the DVD for years, but I just never had the nerve to watch them," Hamill said.

"So with great trepidation, I clicked and I watched William Katt and Robby Benson and Kurt Russell and me. And my impression was: any one of those guys was perfect. Robby was sort of the most boyish and coy and cute, but he was good. They were all great!" Fun side note: Russell was floated as a possible Luke and Han Solo, but removed himself from the running when he went to make a different film.

Hamill said that the final decision for who to cast came down to the wire, and there were two groups director George Lucas was deciding between. "They never mixed and matched. It was either Carrie, Harrison and me, or the three other people."

Even as Lucas was packing to travel to London to shoot the film, he hadn't picked a starring cast. Hamill claims that Lucas' then-wife Marcia Lucas urged the director to pick Hamill's group. "So I always like to give her a shout-out, because it changed my life in so many wonderful ways."

And what did Hamill think of his own tape? He admits that he could come across as needy in those early days, but he managed to be at least somewhat relaxed when he auditioned. "I wasn't terrible," Hamill said.

Check out our Star Wars: The Last Jedi info for everything you need to know about the upcoming movie. And make sure you pick up a subscription to Total Film Magazine for more exclusive stories about the film before it hits theaters in December.