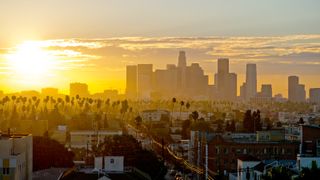 The French novelist Henry De Montherlant wrote, “Happiness writes in white ink on a white page.” His argument was that, from Charles Dickens to Ian McEwan, only fiction’s tragedies, trials, aberrations and villains lodge in the mind; the good guys and the good things that happen to them are, a few notable exceptions aside, forgettable. It’s a belief that’s seemingly characterised the work of Rockstar North, the developer of the Grand Theft Auto series, whose rogues’ gallery of gangsters, mobsters and tricksters has smeared dark stories across our screens for the past 17 years. Our protagonists lie and cheat for every last dollar, grinding into the sand the heads of those they clamber over, and, in doing so, imprinting themselves in our memories.

But if GTA’s villainous cast lacks beauty, the worlds these characters inhabit exude the stuff. And perhaps none more so than Los Santos, the sun-baked fictional analogue to Los Angeles that took the leading role in 2004’s San Andreas and the most successful title in the series to date, GTA 5. Seeing it produces the kind of impression that does stick in the mind – not only for its looks and vistas but also for its unshakable sense of place. GTA 5’s vast geography, 49 square virtual miles of the stuff, stretches from the Los Santos International Airport in the south of the city, through the central district, bordered by the Del Perro and La Puerta freeways and the Los Santos river, up through the Tongva Valley, over the San Chianski Mountains and back down to Blaine County and the lapping ocean beyond. But the city is the focal point for the game’s drama, a whirlpool of human life, lights and activity into which we are irresistibly drawn.

Los Angeles is, perhaps more than the subtly warped Miami and New York-alikes of the other GTA games, the ideal setting for the series. “Imagine a city full of people ruthlessly pursuing wealth, fame and self-improvement, at any cost,” invites GTA 5’s manual. “Where everyone you met was either a celebrity, trying to be a celebrity, or used to be a celebrity…” Indeed, it’s a city of juxtapositions, from the ultra-rich movie stars who inhabit the echoing mansions of Beverly Hills (or Rockford Hills in Rockstar’s fiction) to the shuffling homeless people that trudge along Skid Row (Mission Row). There’s the smog, guffed out by the oily traffic of the city’s eight-lane freeways, which blankets some of the most spectacular coastline in all of America. Its cement flatlands rub against forested mountainsides; police helicopters buzz alongside screeching eagles. Saul Bellow wrote of the place: “In Los Angeles, all the loose objects in the country were collected, as if America had been tilted and everything that wasn’t tightly screwed down had slid into Southern California.” What better place for Rockstar North to pick over contemporary America’s human detritus than here, in the confused county?

As with all of Rockstar’s fiction, Los Santos is an amalgam of the real and the imagined. The ‘Santos’ of its name means ‘Saints’ in Spanish, a typical dual play on words from Rockstar, sidling up against the ‘Angels’ of real-world Los Angeles and playing off against the unsaintly characters that flit across the game’s landscape. GTA 5’s team reportedly conducted more than a hundred days of research in Los Angeles, taking thousands of photographs and countless hours of video.

The exacting research is clear to see, even in the perverted names: Los Angeles’ Bunker Hill becomes Pillbox Hill, Bel Air morphs into Richman, Hollywood and its signage transmogrify into Vinewood, while Compton becomes the impoverished, gang-torn Davis. The city isn’t an exact recreation of Los Angeles, but it is, in a sense, a perfected recreation. The famous landmarks are all present and correct, as are the most important residential districts. But the fat has been trimmed, the sprawl tightened – an urban surgery to improve what the city’s planners could never have anticipated or managed in the real world. The game world’s contents are familiar but condensed; it is the Los Angeles of dreams, even if, in narrative terms, they are often nightmares.

In August this year, Aaron Garbut, the art director charged with the creation of Los Santos, talked about what he views as the city’s most interesting asset. “The buildings, the people, the cars, the architecture, even the smog, it all centres around the sunshine,” he said. “There’s poverty, violence, and a real underside to the city, but it’s the sun that gets you first.” Garbut’s viewpoint is echoed by the game, which refers to the city as a place where “nature’s bounty” means you can “enjoy perfect weather all year round” and where the “air [is] so good you [can] literally see and taste it”.

“Dare to dream, because that city exists,” Rockstar North invites, with typical overstatement. But it is right. Los Santos exists in part in the Los Angeles of our reality, in part in the zeroes and ones etched into the game’s disc, but most importantly and most enduringly in our minds, where its concrete contours have become a part of our own internal stock of mind maps.

Stand upon Los Santos’ brightest monuments – the Maze Bank Tower, the Vinewood sign or even the end of Del Perro pier (a lovingly rendered homage to Santa Monica’s pier). There, watch the sun wheel down in the sky and the light bruise from white to yellow to purple and know that, when it comes to this city, happiness doesn’t write white.