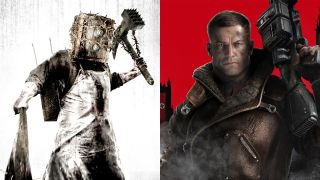 Over the weekend, Bethesda sent press an invite to check out its lineup of games coming to E3 2017 - nothing surprising there, right? But the way the company did this was via an image of "Bethesdaland," a (I should stress, totally fictional) theme park with areas representing several of the properties it owns. And two of them are marked "under construction."

Take a look for yourself:

So starting at the very top center and moving clockwise, we have The Elder Scrolls, Doom, Quake, something under construction, Fallout, Dishonored, Prey, and one more project not quite ready to be revealed.

Rumors have been swirling for more than a year about a follow-up to 2014's excellent Wolfenstein: The New Order, with the voice actor of BJ Blazkowicz Brian Bloom pretty much confirming "Wolfenstein: The New Colossus" back in October 2016. He directed curious readers to "look at Bethesda’s E3 2016 lineup - there was a title hinted at in a cool way. It sparked a bit of wildfire.  That subtle, very simple DOS language, going through the titles. Perhaps we’re working on that as we speak". Perhaps, Brian? Our suspicions are only confirmed by the fact that straight afterwards he becomes particularly cryptic. "There are characters that I’ve played in the past that people seem to have liked that have new versions in the works. Better for me to keep my mouth shut for now”. No, Brian! Tell us more! Take a look below to see the mysterious DOS language he was going on about.

Meanwhile, glance below and you'll see the job listing uncovered by NeoGAF, which suggests that The Evil Within 2 (or Psycho Break 2 as it would be called in Japan) is also just around the corner. Translated by NeoGAF's Dusk Golem, apparently it's an advert for a 'translating and Q&A bug reporting' role. Could these be the "under construction" areas of Bethesdaland? Seems like a pretty safe bet to me - at least safer than another Brink, Wet, or Rage game anyway. But tell us what you think: if you had it your way, what games would you like to see announced at E3 2017?