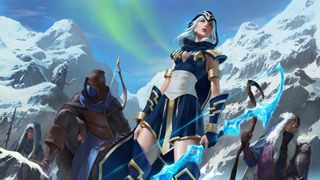 The best Legends of Runeterra decks might not include every champion from League of Legends’ ever-growing roster but some decks do stand out. Currently the Legends of Runeterra decks feature 24 champions to pick and choose from, giving fans of Riot’s MOBA plenty of familiar archetypes to experiment with. Decks consist of 40 cards, and each of the game’s six regions houses their own unique champion cards, followers and spells. There’s certainly a lot of choice available and choosing which cards to add to your collection can be a little tricky, especially when you don’t know which decks are the strongest.

To help you increase your win rate, we’ve put together a list of the very best Legends of Runeterra decks you should be using when queuing up for competitive matches.

Playstyle - Obliterate your opponent’s cards with board wiping weather effects.
Best for - Removing and damaging all enemy units on the board.
Weakness - Can be difficult to win late-game fights if you fail to draw into Anivia, Tryndamere or Ruination.

Legends of Runeterra control decks are not only incredibly strong, they’re also very difficult to deal with once they get going. This frosty deck has been cooking up an icy storm since the closed beta – in fact, the Freljord’s finest duo are still dominating the competition. What makes this deck so potent is Anivia and Tryndamere’s unique revive mechanic which enables them to shrug off fatal damage, allowing you to use Spells that hurt all units. This makes cards like Avalanche, She Who Wanders and The Ruination particularly potent, especially when dealing with horde-based decks or those that rely on a few key units for their win condition. To make matters even better, both Anivia and Trydamere level up once they fall in combat, giving you increased attack power and defence until they are defeated.

Anivia’s levelled up form grants her two additional damage to all enemy units when attacking, while Tryndamere’s overwhelm ability unleashes any excess unit damage onto the enemy Nexus instead. The sheer amount of spells in this deck makes countering it particularly difficult, especially if your opponent’s deck lacks the reactionary removal cards needed to dispel the various weather control effects. You’ll want to ensure you always have a steady flow of removal spells hitting the board, so make sure to use Wyrding Stones and Catalyst of Aeons to help generate the mana gems needed to cast your most powerful spells. Once your foe is at breaking point, throw down The Ruination to kill everything on the board and send in Anivia and Tryndamere to deal the final blow.

Playstyle - Sacrifice your own cards in order to buff Elise’s Spiderlings.
Best for - Swarming the board with hordes of empowered units.
Weakness - Board wipe cards can make short work of your eight-legged army.

If you like the idea of overwhelming your opponent with swarms of eight-legged critters, then Swim’s Dawnspiders deck will allow you to do just that. This deck is not only very easy to play, but it’s also effective at racking up large amounts of Nexus damage. In order to unleash as many spiders as possible, focus on attacking with Elise and using your Dawnspeakers to buff the spiders whenever an allied creature dies. The great thing about Elise’s Spiderlings is that they are completely disposable, meaning you can cull them in exchange for cards like Ravenous Butcher, Chronicler of Ruin and Rhasa the Sunderer, while cards like Glimpse Beyond give you the opportunity to draw even more cards when you dispose of an ally.

The synergies and combos are very reliable in this deck, so there’s rarely a scenario where you’ll be unable to fill the board with units. Elise is also only a two-mana cost card, meaning you can instantly start creating your arachnid army as early as turn two. Things get even crazier once you have access to multiple Elise cards, especially if your opponent has no reliable way to block all your bloodthirsty critters.

Fiora has one of the most unique and powerful win conditions in the entire game – in fact, it’s so strong that she can single-handedly lead you to victory if you manage to keep her alive. Once the Demacian duelist has successfully killed two enemy units, she’ll receive a +1 to both her attack and health, as well as gaining access to a potential game-winning objective. If Fiora manages to kill four enemies and survives, she’ll instantly win the game. This may seem like a rather tricky task to achieve at first, but Fiora’s Challenger ability makes cutting down multiple foes incredibly easy. Challenger allows the Grand Duelist to choose which enemy unit blocks her attack, giving Fiora plenty of opportunities to shred through her opponent’s weakest cards.

When Fiora is combined with the protective barriers from Shen and shield-based cards like Ki Guardian, Brightsteel Protector, Prismatic Barrier, Spirit’s Refuge and Riposte, there’s usually very little your opponent can do to whittle Fiora down. Simply apply a defensive barrier to Fiora whenever you’re forcing fights, then use Judgement to slice your way through all battling enemies for an instant game-winning play.

Playstyle - Discard cards in order quickly shred through your opponent’s units.
Best for - Generating early-game tempo that allows you to dish out huge amounts of late-game damage.
Weakness - Requires a decent amount of setup and a good grasp of the deck’s main combos.

Juggling axes and sending them whirling towards your own units may seem like a counterintuitive move, but the Glorious Executioner has always had a taste for the macabre. This Jinx and Draven deck is all about quickly generating tempo in the early-game and unleashing absurd amounts of damage in the late-game, often forcing players into bloody fights they can’t possibly win. Not only does Draven’s Spinning Axe filter out your hand, it also gives an ally an additional point in damage for the duration of the round. This provides you with an absurd amount of power during the attacking phase, especially when you have multiple Spinning Axe’s wreaking havoc on the battlefield.

Of course, the constant discarding will eventually take its toll on your opponent’s and your own units. Fortunately, you can effortlessly refill your hand with Jinx and Augmented Experimenter. Doing so will give you a steady flow of disposable units that you can use to constantly buff your allies, giving you even more damage during late-game rounds. Simply burn through your cards with Draven’s Spinning Axes and watch as Jinx barrages your enemy’s units and Nexus with Super Mega Death Rockets.

Playstyle - Rush down your opponent with hordes of empowered spectral units.
Best for - Getting lots of disposable cards onto the board and unleashing consistent damage.
Weakness - Relies heavily on keeping both Hecarim and Zed alive as your cards benefit from their ghostly summons.

This ghostly deck revolves around filling the board with empowered Ephemeral units when attacking. While these units may only last one turn, they can deal huge amounts of damage when combined with cards that bolster their health and damage. For example, Hecarim’s levelled up form grants his spectral allies an extra +2 to their damage, while cards like Soul Shepherd give a +1 / +1 whenever an Ephemeral unit is summoned. If that wasn’t enough, Zed can also create an attacking Living Shadow with his exact stats, giving you a huge boost to your damage output.

Commanding an army of undead minions that vanish after every battle or when the round ends may sound rather difficult to manage, but spell cards like Haunted Relic, Onslaught of Shadows and Dawn and Dusk ensure that your nightmarish army is never far from the battlefield. Controlling an army of the undead is not only incredibly fun, it’s also very powerful when played aggressively.