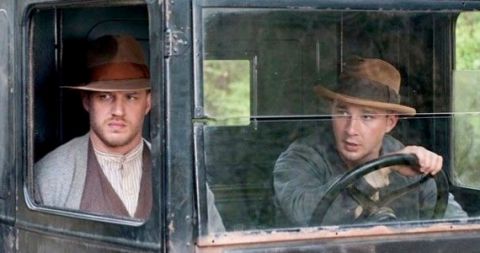 As Bane, Tom Hardy proved that covering his mush with a mask was no barrier to creating an animalistic on-screen presence.

Lawless similarly constrains him, limiting his arsenal (but not his charisma) to little more than ursine grunts, stone-cold stares and a flexing jaw muscle as the leader of the bootlegging Bondurant brothers operating in the Virginia backwoods during prohibition.

If Bane was a coiled cobra, Forrest Bondurant is a mama grizzly, ferociously protective of his family, deadly when provoked.

So while he may taciturnly run a gas station-cum-distillery with an expressive growl and a gnawed cigar, he’ll switch to bone-crushing force when his hired help (Jessica Chastain) or his cocky youngest brother, Jack (Shia LaBeouf), are threatened.

And with Jack impulsively stirring up trouble in pursuit of gangster glory and ruthless prohibition agent Charlie Rakes (Guy Pearce) dick-swinging in town, Forrest has his knuckle-dustered hands full.

Like their previous (superior) collaboration, The Proposition , director John Hillcoat and writer Nick Cave’s evocative and brutal study of masculinity and power is another transposed western, charting the determination of men in a chaotic, cruel world. As Forrest says: “it’s not the violence that sets a man apart, it’s the distance he’s prepared to go.”

Here, those lengths include slit throats, genital mutilation, tarring and feathering, neck-snapping, face-breaking, Tommy-gun strafing... and yet, often, it’s not the actual bloodletting that disquiets, rather the teeth-gritting anticipation of it.

It’s not a matter of if violence will come, but when. It’s a kill-or-be-killed world.

While this is ostensibly Jack’s story (the narrative driven by his coming-of-age peacocking), the grit and dramatic thrills lie with the brooding power players: Hardy, Gary Oldman’s underused kingpin (a showstopping entrance but not much more), Pearce’s deliciously chilling creep.

LaBeouf may do well to bury memories of robots with a decent take on puppyish ambition, but it’s the smaller moments from the big boys that truly register in a film where surprises are delivered by performance, not by a plot which, although based on a real family, is as well-worn as Jack’s tatty boots.