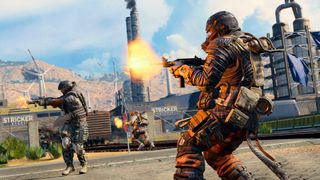 Vonderhaar has now appeared to halfway walk back on his previous comments regarding the absence of jetpacks in this year's Call of Duty game, suggesting he never stated so in the first place. Ok then.

Whatever this year's Call of Duty game is going to be, it won't have jet packs. The confirmation comes from Treyarch Game Design Director David Vonderhaar, most known for his work on the Black Ops series, who made the unofficial announcement from his personal account on Twitter.

In case you're wondering why Vonderhaar sounds so emphatic in his answer, a follow-up tweet from the developer reveals that the critical response to Black Ops 3's inclusion of jet packs in 2015 still hangs heavy on his mind, and clearly the studio wants to avoid another fan backlash.

Such short-term memories. You hung me from the highest branch. No. NO. I have PTSD.January 5, 2020

While the next Call of Duty game is yet to be officially announced, previous reports have all but confirmed that Treyarch is working on this year's installment in the first-person shooter franchise, which is said to be another Black Ops sequel after Sledgehammer's CoD project was unexpectedly cancelled.

Before we hear anything about Black Ops 5, however, fans can rest easy knowing that boots will remain firmly on the ground when Call of Duty season inevitably rolls around later this year. As for the present, well, Infinity Ward is expected to announce battle royale for Call of Duty: Modern Warfare anytime now...

As a new year and new decade begins with 2020, look back with us at the 100 best games of the decade just gone.