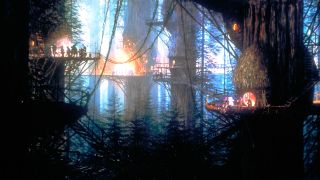 Conventional wisdom would have it that the 1997 Star Wars Special Editions are abominations; patchwork monstrosities that add a render farm’s worth of ropey CGI, unnecessary extra dialogue and the indescribably rubbish ‘Jedi Rocks’ musical number.

But there is one major change Lucas got right when ‘correcting’ the perceived ills of his galactic trilogy: replacing the original ‘Ewok Celebration’ – the track that closes out Return of the Jedi – with the vastly superior ‘Victory Celebration’. Stick that in your Yub Nub and smoke it.

While we can all agree that swapping out the dignified Force ghost of Sebastian Shaw for Hayden Christensen’s petulant man-baby Anakin in the 2004 DVD release was a crime against common sense, I’d argue that John Williams’ aural improvements are equally incontestable: his ’97 composition a more fitting climax to Luke Skywalker’s journey from whiny farmboy to Empire-toppling Jedi Knight. The ‘Victory Celebration’ has a grandeur that better reflects the Rebel Alliance’s achievements, while never forgetting it’s being performed by a tribe of tree-hugging teddy bears.

Crucially, it’s also a track laced with melancholy. There’s a poignancy to those slightly-cheesy-on-first-listen flutes that perfectly captures the sense of loss, sacrifice and suffering victory necessitated, while feeling upbeat enough to leave a note of hope for the future.

The ‘Ewok Celebration’, or ‘Yub Nub Song’ as it’s affectionately known, is more triumphant in comparison, but to a simplistic degree. I understand the logic – it’s being performed by a few Ewoks on Endor, not a 200-piece orchestra – but after three films it sounds muted and anti-climactic to my ear. It’s also extremely silly, which may be a silly thing to say about a children’s film, but the nonsensical lyrics add nothing: “celebrate the love” are the soppiest words in the Star Wars canon until Episode 2’s “I don’t like sand”.

It’s not that I dislike Yub Nub; I still smile whenever I hear it, and the very idea of Lucas having tinkered with Star Wars at all remains a thorny issue. But there’s no doubt in my mind he made the right call commissioning a new musical ending for Jedi. Or is it just me?

Are the best performances the unshowy ones? argues Philip Kemp

Should we stop using 'fan fiction' as a putdown? argues Kevin Harley

Jordan Farley
Jordan is the Community Editor at SFX and Total Film. When he isn't watching movies or sci-fi shows of questionable quality he's probably shooting men in space or counting down the days till the next Zelda comes out.
See comments