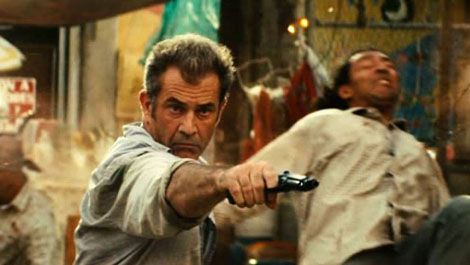 If the title of Adrian Grunberg’s film makes it sound like some sub- Stand By Me coming-of-ager, the attention-hooking opening sequence will put your mind at rest.

With a boot-load of cash, and a dying partner in the backseat, Mel Gibson’s Driver is trying to outrun the U.S. Border Patrol. His answer? Smash his getaway vehicle through the dividing wall, landing him on Mexican soil, and into the waiting arms of the corrupt local police.

Said cops decide that driver needs a spell in ‘El Pueblito’, a notorious jail in Tijuana that allows families of inmates to live inside prison walls with them.

The result is a microcosm of society, or as Driver puts it: “Is this a prison or the world’s shittiest mall?” A thriving hell-hole, where prostitutes mingle with drug addicts, you can even buy your heroin from the ‘smack shack’. In time, Driver forms an uneasy alliance with a 10-year-old kid (Kevin Hernandez).

If the story doesn’t strain itself in pursuit of originality, it does build to a satisfying conclusion, Driver becoming a target of Frank (Peter Stormare), the ruthless criminal he stole from.

With no Beaver puppet in sight, Gibson is on decent form – you’d have to go back to Maverick to find him enjoying himself this much – not least in a gem of a scene where, to fool one character, he impersonates Clint Eastwood on the telephone. That, at least, will make your day.