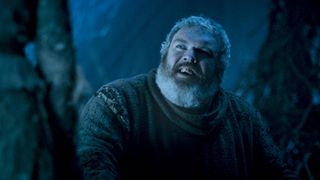 When he’s not holding open doors and making us cry, everyone’s favourite name-saying giant is potentially spoiling what would be the greatest and most unexpected plot-twist in Game of Thrones history. Disclaimer: Take this with a massive grain of salt but, still, it’s pretty darn juicy…

Appearing on the UK’s Thronecast (think The Talking Dead but with the presenter from the now old-school version of Great British Bake Off), Hodor actor Kristian Nairn either let slip something he shouldn’t have or, after only saying one word for several years, got tongue-tied in the worst possible way (h/t Digital Spy).

What did he say? He mentioned that Cersei was “mad, like her father the Mad King.” Now, Thrones’ family trees may have more branches than Starbucks but I’m pretty sure Cersei’s father was Tywin Lannister, not the Mad King Aerys Targaryen. If the Lannisters twins are actually half-Targaryen after their mother Joanna did the dirty on Tywin then that opens up a whole ‘nother can of worms and could complicate things further.

Sure, Kristian Nairn did respond in the usual damage control sort of way saying he gave the wrong name but he would say that.

I just said the wrong name .. had to bone up on two episodes I hadn't seen too , so got a bit befuddled haha2 August 2017

And, besides, it’s a lot more fun trying to work out if and how Cersei is related to Dany. They are both blonde after all.

Was it a mistake or an actual spoiler? You be the judge.