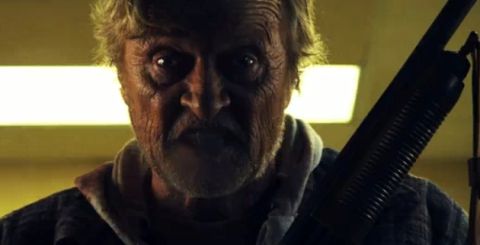 Whether replicant from the future (Blade Runner), cyberpunk from the past (er, Alan Partridge), or rumbling butter salesman (that brilliant Lurpak advert), Rutger Hauer is an actor who always, always brings it, no matter how demeaning the work.

Seeing as that’s the whole point of Jesse Eisener’s faux-awful video nasty throwback (based on one of the fake trailers attached to selected prints of Grindhouse), it’s perfect casting.

Having hitched a lift into Hope Town on a freight train, Hauer’s itinerant finds a city in flames – corruption rules the streets and the police station, drugs and prostitution are rife, and filmmakers several notches below Eisener pay local tramps to fight each other on camera.

Threatened by the local druglord (Brian Downey) and his sons (Gregory Smith and Nick Bateman), who style themselves the “princes of Fuck Town” while dressed, for some reason, like Tom Cruise in Risky Business, Hauer vows to give them both barrels of his newly acquired shotgun, in the process saving Molly Dunsworth’s sympathetic hooker.

Mostly this means barking lines such as, “Jerk on this, you child-molesting shit-licker!” as heads burst in corn-syrupy spurts, but at least his intentions are good.

It’s astonishingly tasteless – one scene features a human piñata being beaten with a razor-blade-studded baseball bat while naked chicks dance around and Smith and Bateman mimic The Last Supper – and authentically lawless in a way the higherbudget Machete could never hope to emulate.

Make no mistake, though, this is Hauer’s film and he grabs it two-handed. With a slack mouth forever twitching at some half-remembered truth, eyes that have seen things us people definitely wouldn’t believe and that apocalyptic voice, his Hobo is a genuinely unhinged creation – what grizzled would look like if it really let itself go.

Yet even as he wastes paedos and pushers with extreme prejudice, Hauer lends the character an owlish dignity that almost lifts the movie out of the gutter.

The irony when filmmakers aim floorwards with such aplomb is that it hints at how much more they’re capable of. The same goes for Hauer, who acts like this is his Wrestler. Until someone writes him one, however, Hobo will definitely do.