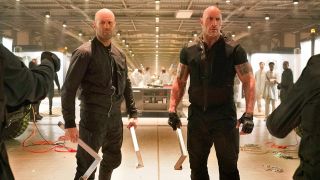 The new Fast & Furious movie, Hobbs & Shaw, squeezes a lot into its runtime. Not only does the spin-off feature Dwayne Johnson, Jason Statham and Idris Elba punching each other across the globe, but the movie also contains a handful of weird and wonderful cameos. We sat down with director David Leitch to discuss just how they came about.

However, first things first: this article contains some major spoilers for Hobbs & Shaw. If you haven't seen the movie, which comes pretty high on our ranking of the Fast & Furious movies, then bookmark this page and come back later!

Still here? Well, as you know, starring alongside Vanessa Kirby, Helen Mirren and Eddie Marsan are some surprise A-list actors, namely Ryan Reynolds, Rob Delaney and Kevin Hart. Those first two previously appeared in Leitch's film Deadpool 2, while Hart has starred alongside The Rock in multiple movies (Jumanji: Welcome to the Jungle and Central Intelligence).

Quizzed about whether working with the two X-Force members Reynolds and Delaney meant that another Deadpool movie could be on the way, Leitch remained coy, saying: "I would love to work with any of those guys, and I look forward to any of the opportunities that come up."

Discussing how the Kevin Hart cameo came about, the director was a little more forthcoming. Asked jokingly whether it's in Johnson's contract that there needs to be a role for Hart in all his films, Leitch said: "It’s not in Dwayne’s contract, that I know of. But those guys are really close. They love each other's comedy. It was Dwayne who reached out and said can we find something for Kevin.

"We had this epiphany that he’s basically Leo Getz, from Lethal Weapon, in that he can just get things. It turned out great. He came on and did some really funny stuff, wrote some funny things. It was very fun."

So there you have it, Hart and Johnson are just friends who love working together! There's definitely a pun in there somewhere... For more on Hobbs & Shaw, check out our interview with Statham. The movie's in cinemas now.