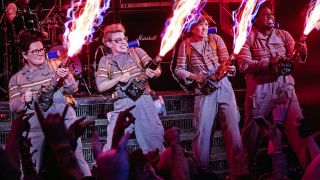 It's only a matter of weeks before we get to experience Ghostbusters in all its slimy glory on July 11 (15 in the USA). The worldwide reaction to the movie so far has been, well, intense and it turns out that even director Paul Feig was hesitant to take the helm on the much loved franchise. “I turned it down the first couple of times,” he says in the an interview in the new issue of Total Film out on Friday.

“They had a script written by someone else. It was a funny script, but it was that feeling of… Harold [Ramis] had just passed, Bill [Murray] didn’t want to do it – is it weird to do it with [only] two Ghostbusters? I didn’t like the idea of a new team being given the old technology, because then you go into another ghost story. I like origin stories, so I kept turning it down.” And it wasn't just Feig that kept saying no. A number of other comedy directors turned down the project too. Why? “Because we’re terrified of it!” says Feig. “It’s canon. It’s like we’re doing The Godfather – the comedy Godfather.”

Feig decided that the only way he could take on this behemoth was if he "cast all the funny women I know" and go for a full reboot of the original, rather than force a connection to the previous movies. He then pitched this idea to producer Amy Pascal and says "it's been a runaway freight train since then."

And then there's the reaction to the trailers so far which has meant slews of abuse towards Feig and everyone involved in the project. Nothing deserves this level of abuse but the director understands where the passion comes from. “People were so excited. When I first announced it on Twitter, it was a day of people going crazy. And then it was just that second wave where the haters come in and all that,” he says. “But look, I totally understand it. Any time you touch something that people have grown up with and is so popular, and is so beloved, everybody gets nervous. I get nervous if I hear it and I’m not doing it!”

Read the full interview with Paul Feig and the rest of the cast in the new  Total Film magazine out on Friday or subscribe to further issues here.