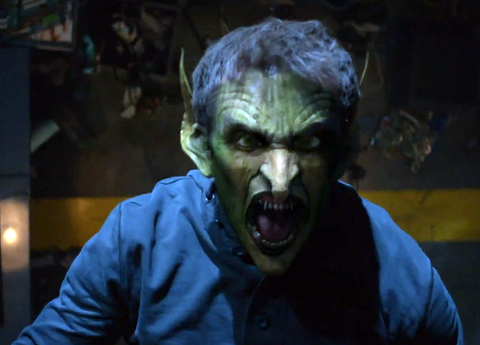 THE ONE WHERE Nick and Hank have a new case in a completely different realm – online. Renard has bad (and explosive) news from Europe. Meanwhile, Juliette is starting to get her memory back at last and gives Nick an ultimatum.

Nick's (literally) nameless nemesis is an IT temp who fixes a PC and spins code into some kind of super-MMORPG macguffin in exchange for a date, goes on a murderous rampage when he gets stood up and eventually comes a cropper when the woman he asked out finally remembers his name. There are some lovely creepy moments including the premise of your in-game avatar being bumped off as a prelude to your impending doom, a literary puzzle for Team Grimm and those shudder-inducing acid-dripping slicing fingernails, made all the more disturbing for the brilliant use of suggestion rather than showing a complete CGI monster.

It's not all good news though. Writer Akela Cooper wrote Halloween episode “La Llorona”, but sadly this isn't anywhere near as assured. The dialogue is very cheesy at times, especially for the guest characters based at Spinner, the company behind the game (see what they did there with the company name? It underlines the feeling they spent ages making the fairy tale fit the premise, but sadly much less time on writing believable guest characters who you cared about Nick and co saving).

Despite some rough edges, the case itself – complete with cat and mouse taunting of the police – gives Reggie Lee as Sgt Wu a chance to be more than a quip machine, suddenly showing that he's a vital member of the investigation team with his literary knowledge, gaming and Sudoku skills (“I am all over this. I've done my fair share of gaming since my life consists mostly of myself and my cat.”)

We also get some sweet Monrosalee beats in between the death and terror, including a moving, albeit brief scene where our favourite Blutbad gives his love interest an antique clock for the spice shop.

Any concerns that the last few weeks' monster procedurals mean we're dropping the over-arching mythology are alleviated here, when Renard meets a source to get information about his brother and the machinations happening in Wesen royal Europe. The small amount of screen time he gets makes for the most memorable moments of the episode, always a sign the case of the week isn’t that strong. The drop-off scenes (when Renard is given a flash drive with coup-conspiracy names on it) is both intriguing (will there be a familiar name on the list?) and exciting, especially when he realises a briefcase at the bar contains a bomb and leaps into action. Still no Claire Coffee though, which is a shame.

The final scene between Nick and Monroe does leave us at a narrative crossroads. Juliette's ultimatum that either Nick tell her the truth or she'll leave suggests that (finally) we might have some resolution here as we head towards the season's home straight. I'm not the only person mentally screaming “Leave!” though, right?

BEST BIT Monroe’s desperate back-pedalling having let slip to Juliette about the existence of the Grimm trailer.

• Read out other Grimm reviews