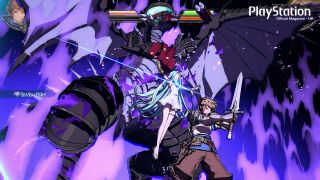 While this might be based on a mobile JRPG that hasn't been officially released in the West (if you can bypass the region restrictions, the game is translated), the names involved ought to pique your interest. Arc System Works, known for the likes of BlazBlue, Guilty Gear, and Dragon Ball FighterZ, is turning this sky pirate fantasy into a fighter that remains true to the developer's pedigree, but with enough of its own to make it unique.

Just like Arc's previous 3D games, Granblue Fantasy: Versus is visually stunning, looking like two-dimensional anime in motion. But it has the same look as the original illustrations, and adapts UI elements that will be familiar to fans of the mobile game. For instance, in addition to the standard 1v1 modes, there's a story-focussed RPG mode.

Bosses here replicate the Raids in the main game, right down to the way each boss' health is presented, and how it appears large and looming on one side of the screen while your heroes are on the other, under their own little status boxes. It feels authentic. This is, after all, the developer that recreated iconic anime moments almost frame-by-frame for Dragon Ball FighterZ.

The fighting system is a great mix of simple and technical. Publisher Cygames has been careful to make sure this is a fighting game that will please veterans, yet remain accessible to those more familiar with the laid-back, turn-based original RPG experience.

By default, characters all have light to heavy combos on square, triangle, and circle with variations depending on directional input, plus a unique special move on q that vastly changes how they play. These range from parries to extra dashes, and you'll want to make sure you're not only using yours to the fullest, but that you know what your opponent is capable of doing.

Skills are more powerful moves that don't use any sort of special bar (only your Skybound Art super move has one of those). Instead, they operate on their own individual cooldowns, mimicking the way they work in the mobile game, almost giving this fighting game the flavour of classic-feeling JRPGs.

Each skill is mapped to the trigger with a directional input, and is represented with an icon below your health bar, which indicates the rough type of skill it is – meaning you can always be aware of what specials your opponent might be sitting on, and also when they're the most vulnerable. Granblue Fantasy: Versus isn't just set in an interesting fantasy world, it's adding extra dimensions to the fighting game genre.