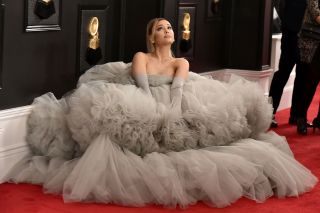 The internet went wild for this year's Grammy red carpet fashion, with four artists in particular looking like they walked straight out of a video game. Billie Eilish, Ariana Grande, Billy Porter, and Lil Nas X were Twitter's main focus, with thousands of likes and retweets thrown about for those referencing the artists' uncanny resemblance to Batman villains, Pokemon gym leaders, or manga characters.

Indonesian artist Ray Pratiwi was inspired by the Pokemon connection and took the comparisons one step further, drawing the four phenoms as Pokemon trainers. "A lot of the designs are not that complicated, so it's relatively easier to draw, but also not too simple and generic," Pratiwi told Buzzfeed News, "The human characters are also nicely designed too! I'm a sucker for 'themed' character designs, and a lot of the human characters are designed around a specific Pokemon 'type'. I really enjoy drawing them."

Pratiwi drew Billie Eilish, who walked the red carpet with neon green and black hair matching her outfit,  as a trainer specializing in Poison-type Pokemon. She's standing alongside Alolan Muk, her iconic claw-like fingernails on display.

Ariana Grande, whose grey cloud-like dress enveloped her on the red carpet, is drawn as a Ghost-type trainer, with a Dusknoir standing guard behind her. Grande fans will know the singer is far more partial to Eevee - she's dressed as Eevee for Halloween before and even has a tattoo of the cutie on her forearm. However, her Grammy look was decidedly ghostly, so it makes sense that Pratiwi went with that look.

We love some good fan art, and this work is some of the best.