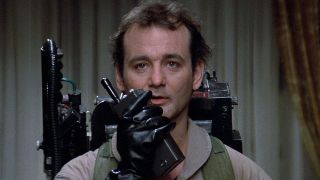 Bill Murray will reprise his iconic Ghostbuster role for the upcoming sequel Ghostbusters: Afterlife. Other original cast members Dan Akroyd, Ernie Hudson, Annie Potts, and Sigourney Weaver, have also been confirmed to appear in the new movie, which will ignore the events of Paul Feig's Ghostbusters.

Talking to Vanity Fair on the set of Ghostbusters: Afterlife, Murray gave a somber reminder that, while a few Ghostbusters alumni are returning, there will always be a gaping void with the passing of Harold Ramis in 2014. "Well, we are a man down. That’s the deal," Murray said. "And that’s the story that we’re telling, that’s the story they’ve written."

Each of the returning cast members will reprise their roles in Ghostbusters: Afterlife, with Hudson's Winston Zeddemore and Akroyd's Ray Stantz joining Murray in representing the original Ghostbusters crew. Annie Potts is back as the perpetually annoyed secretary, Janine Melnitz, and Sigourney Weaver is returning as the paranormal's favorite host body, Dana Barrett.

Murray, Akroyd, Hudson, Potts, and Weaver each shot their scenes for Ghostbusters: Afterlife last year. As expected, the veteran actors will support the main cast of the movie in lesser roles. Finn Wolfhard (Stranger Things), Mckenna Grace (Captain Marvel), and Carrie Coon (The Leftovers) will star as the unsuspecting family at the center of Afterlife's story. Paul Rudd is co-starring as a teacher and ally to the small family.

Despite Murray and Afterlife director Jason Reitman's long-standing friendship, Murray's role in the movie wasn't a sure thing until Murray approved of the script. "The script is good. It’s got lots of emotion in it. It’s got lots of family in it, with through lines that are really interesting," Murray said. "It’s gonna work."

Ghostbusters: Afterlife is just one of the many exciting upcoming movies for 2020 and beyond.