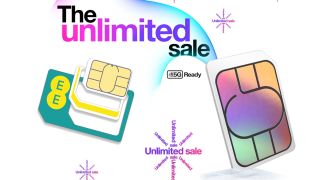 Picking up a cheap SIM only deal is the way to go if you've already paid off your phone, don't feel like upgrading the device itself (perhaps you already own the best gaming phone already), or want data for the best gaming tablet. Besides saving you money in the long run, compared to a standard contract, they're just less hassle: you don't need to worry about paying off a machine or device as well. Anyway, they're well worth your consideration, and we've picked some out for you to liven up your weekend. For example, you can currently get unlimited data from Three at £10 per month for six months, and then £20p/m after that. Similarly, EE is giving a SIM only discount on 60GB data for £20p/m. These offers are significantly cheaper than many of the standard contracts you'll see on the market, and because you're getting far more data than you're likely to need, they're excellent value for money too.

Both of these cheap SIM only deals is a bargain, but there are some key differences to be aware of. To start with, the Three offer is for 24 months overall and allows data roaming around the world. In addition, it only costs £10p/m for the first six months - after that point it's £20p/m (so although it has unlimited data, there is a slight drawback to keep in mind). Meanwhile, the EE contract is for 18 months. Even though it's a bit more expensive at £20p/m and 'only' has 60GB of data each month, the EE network is known to be a lot faster and more reliable. However, you only get EU data roaming.

After all, if you play mobile games a lot like Fortnite, you'll need some big ol' data allowances to chomp thru every month, and what better way to do that than on the cheap. No matter which deal you prefer, you can see each discount laid out below.

Three unlimited data each month (24-month contract) | £10p/m for 6 months, then £20p/m
Don't want to worry about running out of data? This is the contract to go for. Just remember, it's £20p/m after six months.View Deal

EE 60GB data each month (18-month contract) | £20p/m
Although this contract is a little pricier up front, it's shorter and boasts one of the UK's most reliable networks.View Deal

If you want to complete your mobile setup, it's worth taking a look at the best gaming headphones - they'll increase immersion in everything from games to movies, and they also mean you won't be sharing the experience with everyone else on your morning commute.