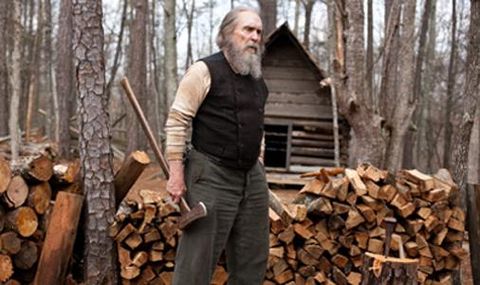 I’m after a funeraL!” growls Robert Duvall’s backwoods hermit at wily undertaker Bill Murray in Get Low, a slight but appealing fable based on a much-embellished tall tale from Depression-era Tennessee.

The catch is that Duvall’s prickly Felix Bush wants said service when he is still alive, the better to finally spill the beans about the dark secret that made him shut himself away from human contact for the last 40 years.

We get an inkling of what’s in store later in an opening teaser showing a fellow fleeing a burning house. thanks to the leisurely direction of former DoP Aaron Schneider (Kiss The Girls), Low takes its sweet time laying Felix’s cards on the table, filling the interim by showing how his unusual request impacts upon Murray’s opportunist, his honest young apprentice (Lucas Black) and Mattie (sissy spacek), an old flame whose life was also singed by that fateful conflagration.

Get Slow, then, might be a more fitting title for a defiantly old-fashioned affair that gets its kicks watching seasoned pros work with material ideally suited to their talents.

Duvall in particular hasn’t had a lead role this robust since 1998’s The Apostle – a fact that, coupled with his advancing years, suggests this vehicle may also be a magnet for awards recognition.

For all that it’s Murray who makes the greater impression, his droll deadpan and deft underplaying offering a neat, sly complement to Duvall and Spacek’s more actorly flourishes.

The real Felix took his skeletons into the grave. His fictional counterpart leaves little to the imagination, placing pressure on his climactic, tear-choked confession.

There’s a sneaky sense throughout that too much significance and import has been put on what is not much more than a shaggydog tale.

Yet when the old dog in question is Robert Duvall, you can hardly begrudge the filmmakers for giving it a pat.