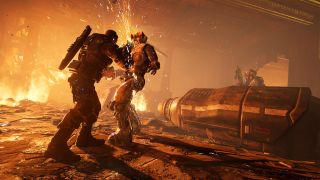 The Gears of War franchise is Microsoft's flagship series alongside Halo, and there has been a plethora of games released. Thanks to CDKeys, you can pick up every single Gears of War game in the main franchise for just £16. This is an absolute steal among so many average Boxing Day sales, and it means that Xbox players can catch up on one of the best action video game series on the platform.

If you haven't played Gears of War before, you may need some convincing as to why this is an absolutely insane deal. From the first instalment set on Sera, you'll be introduced to four legendary characters; Fenix, Dom, Cole, and Baird as you fight against the locusts across multiple games. It was originally planned to be a trilogy, before Gears of War Judgment – which isn't part of this bundle – was released, following Baird and Cole.

Gears 5 is the latest release and arguably the best Gears of War game yet, with an improved Horde mode and cinematic campaign with open-world environments for the first time ever. Kait is the protagonist this time around and it still features a healthy multiplayer base since it was only released earlier this year. So if you've got an Xbox One, what are you waiting for?