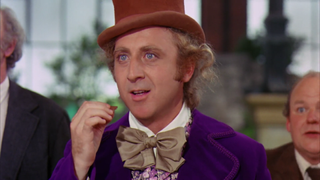 Gene Wilder - the actor and comedian best known for playing Willy Wonka in the 1971 movie adaptation of Roald Dahl's Willy Wonka & the Chocolate Factory - has died at the age of 83 from "complications from Alzheimer's disease".

The sad news was announced by his nephew, Jordan Walker-Pearlman, who released the below statement:

It is with indescribably sadness and blues, but with spiritual gratitude for the life live that I announced the passing of husband, parents, and universal artist Gene Wilder, at his home in Stamford, Connecticut. It is almost unbearable for us to contemplate our life without him.

The cause was complications from Alzheimer’s disease, with which he co-existed for the last three years. The choice to keep this private was his choice, in talking with us and making a decision as a family. We understand for all the emotional and physical challenges this situation presented we have been among the lucky ones -- this illness-pirate, unlike in so many cases, never stole his ability to recognize those that were closest to him, nor took command of his central-gentle-life affirming core personality. It took enough, but not that.

The decision to wait until this time to disclose his condition wasn’t vanity, but more so that the countless young children that would smile or call out to him ‘there’s Willy Wonka,’ would not have to be then exposed to an adult referencing illness or trouble and causing delight to travel to worry, disappointment or confusion. He simply couldn’t bear the idea of one less smile in the world.

He continued to enjoy art, music and kissing with his leading lady of the last twenty-five years, Karen. He danced down a church aisle at a wedding as parent of the groom and ring bearer, held countless afternoon movie western marathons and delighted in the company of beloved ones.

He is survived by Karen, Jordan and the Webbs (Kevin, Grethchen, Tucker, Spencer), along (with) Jordan’s wife Elizabeth. Gene’s sister Corrine predeceased him in January of this year.

He was eighty-three and passed holding our hands with the same tenderness and love he exhibited as long as I can remember. As our hands clutched and he performed one last breath the music speaker, which was set to random, began to bare out one of his favorites: Ella Fitzgerald. There is a picture of he and Ella meeting at a London bistro some years ago that are among each our cherished possessions. She was singing ‘Somewhere Over the Rainbow,’ as he was taken away.

“We are the music makers, and we are the dreamers of dreams.“

The comic star was beloved for his portrayal of the quirky chocolate factory owner Willy Wonka, but it was by no means his only achievement. Twice Oscar nominated for his role in The Producers and for co-writing Young Frankenstein, he made audiences laugh from his debut Off Broadway in 1961, to his final acting role in Will and Grace in 2003.

Many friends and celebrity fans have taken to Twitter to pay tribute to the incredible star, including his Young Frankenstein co-writer Mel Brooks:

Gene Wilder-One of the truly great talents of our time. He blessed every film we did with his magic & he blessed me with his friendship.August 29, 2016

Gene Wilder was one of the funniest and sweetest energies ever to take a human form. If there's a heaven he has a Golden Ticket. ;^)August 29, 2016

Farewell #GeneWilder, comic genius. Thank you for all those happy happy hours. pic.twitter.com/O6oHS9TQqXAugust 29, 2016

A man who lit up the world with his joy and genius. I can't say what it meant to act with him and get to know his heart. ❤️RIP #GeneWilderAugust 29, 2016

I saw Blazing Saddles 7 times at the cinema with my school friends . George St. Cows outside.Gene Wilder you were a genius. Rest in Peace.August 29, 2016