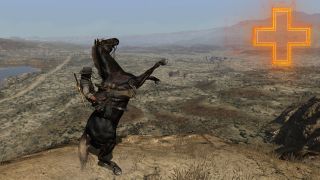 We're celebrating the end of an incredible 10 years for games, movies, and TV shows. Red Dead Redemption is one of the games that defined the last 10 years of play, placing 4th in our 100 best games of the decade rankings. Be sure to check out the full list to see if your favourites made the cut.

How was Rockstar's Wild West won? With the most charismatic cowboy in games, that's how. In John Marston, Red Dead Redemption is graced with the most charming, conflicted, wonderfully doomed leading man. Alongside Geralt of Rivia and The Last Of Us' dynamic duo, Joel and Ellie, this troubled, violent, ultimately sympathetic outlaw is one of the most convincingly three-dimensional characters of the last decade.

There's a core decency to Marston that's simply not present in any of GTA's police lineup of hate-filled felons. Brought to wonderfully gruff, reflective life by Rob Wiethoff, he's that rarest of things: an open world character you actually give a damn about. Finding yourself so easily drawn to this slightly glum, often sarcastic but genuinely caring outlaw is crucial to the storytelling success of the original Red Dead. If you didn't care whether John lived or died, those incredibly bold final three hours wouldn't mean a whole lot.

The fact Rockstar has the guts to deflate the action during Redemption's final act is a masterstroke. Focusing on quiet character-building over escalating shootouts, those last hours on Marston's ranch, and his subsequent gut punch demise, represents arguably the greatest video game ending of the decade.

Rockstar's western epic is so much more than just its teary finale or doomed lead, though. This is the game that torpedoed the notion that gamers weren't into cowboys. Depicting the Frontier has a grimy and gritty land of feckless townsfolk and wicked, sleazy outlaws, this is the Wild West of Deadwood and Sergio Leone. Little House On The Prairie, this ain't.

Redemption separates itself from the rest of the sandbox pack at every turn. The script is rapier sharp, yet never dragged down by GTA's relentless cynicism. Its eye for period detail is unmatched. The use of music throughout is spine-tingling – if you ride into Mexico and don't get all the feels when Jose Gonzalez's chilling 'Far Away' starts fluttering on the prairie wind, you're an unfeeling monster. But this open world outlaw simulator's best quality? It almost never once settles on the standard 'tale the target' mission template that so many inferior games make their bread and butter.

The vast majority of Red Dead's missions are brilliant. Do a Donkey Kong Country and hitch a ride on a minecart, then slow-mo slaughter a bunch of bandits. Boobytrap a road then tactically blow up a travelling posse with clinical cowboy precision. Steal a train, commandeer its mounted minigun, then briefly turn Marston into an old-timey Terminator. Take ice cold vengeance with John's son in a surprise, 'secret' ending, then have a bit of a blub when Ashtar Command's 'Dead Man's Gun' plays over the end credits. Redemption is filled with outstanding outlaw moments.

The fact Red Dead Redemption 2 spins a prequel tale that so deliberately leads into and frames the action of Marston's western is telling. Other than GTA 4's DLC episodes, no Grand Theft Auto was deemed worthy of being treated to a companion piece. Yet with this 2010 melancholy masterpiece, Rockstar realised its teams had hit their storytelling peak. That the sequel's ten-hour-long epilogue focuses completely on Marston, the building of his ranch, and his efforts to repair his family is all the more evidence of the fact that Rockstar captured lightning in a Wild West bottle the first time round.

Red Dead Redemption captures a sense of time and place more effectively than any other game of the decade; this love letter to Leone and Eastwood is a stone cold classic. More focused and less daunting than its (still impeccable) prequel, only GTA 5 and The Witcher 3 deserve to be considered in the same sandbox stratosphere. Celebrating North America's last real romantic era in amazing style, Red Dead Redemption is not only a wonderful ode to a classic movie genre, it's one of the best games of this, or any other decade.