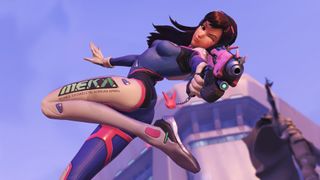 Like Cadbury Dairy Milk, Mad Men, or saying “no you’re awesome,” it’s entirely possible to have too much of a good thing - even Overwatch. Blizzard’s team-based shooter is packed with clever ways to keep players engaged, like totally distinct character abilities that mean there’s always something else to learn once you’ve mastered a skillset. But what happens when you’re a pro with every character? If you’re itching to try out your sharpened skills in a fresh new challenge, here are some similar games like Overwatch that bring their own twists to the online multiplayer formula.

In many ways Team Fortress 2 is Overwatch’s big sister. Released in 2007 (nine years before Tracer first zipped onto our screens), fans have been quick to point out the similarities. Both are team-based shooters where coordination and positional strategy are key to beating the enemy. TF2’s Scout bears a passing resemblance to Tracer, while Overwatch’s Hanzo is strikingly similar to Scout. Jeff Kaplan, the head honcho and game director over at Blizzard, has said on record that TF2 is “one of my favourite games of all time”. It’s also got a few more customisation options than Overwatch, player-edited maps, and totally free-to-play gameplay. At the end of the day, Team Fortress 2 is worth checking out just to see how it inspired one of today’s most popular shooters.

Ninja Theory’s online beat-em-up won’t fully launch until early next year, but you can dive into the technical alpha right now. If you do, you’ll find a game remarkably similar in set up to Overwatch: Quirky characters battle it out in futuristic arenas, working together to capture points or complete objectives. The main difference is Bleeding Edge is totally melee. Fights are won with fists - or chainsaw-augmented hands - instead of bullets. Bleeding Edge is set in a world where cybernetics are common place, so a ragtag bunch of misfits come together to test out their various bodily enhancements. Diving in on the technical alpha means you can get in the game early and learn the ropes before the servers start getting crowded in 2020, plus we've got some Bleeding Edge tips to help you out too.

Poor Battleborn. It hatched from Gearbox’s egg just a couple of weeks before Overwatch took its first breath, and like that bird eaten by its sibling in the David Attenborough documentary, it ended up being the runt. It’s a shame, because there are actually a lot of good ideas here. Sure, Battleborn is yet another first-person shooter that emphasises teamwork among a vast character catalogue. But it also packs a decent single-player mode and much deeper gameplay. Layering multiplayer with MOBA elements, Battleborn is even more strategic than Overwatch. Its servers are pretty quiet now, but if you can find an active game, it’s one of those games like Overwatch that's worth a good few shots.

When Overwatch and PUBG love each other very much, they have a special cuddle, and after one such embrace Apex Legends was born. Respawn’s shooter is a free-to-play phenomenon that combines the Battle Royale mode du jour with team-based class mechanics. Trios of players battle it out across a sprawling map based on Titanfall 2 to remain the last ones standing. Bloodhound, Mirage, Pathfinder and their pals are as unique and interesting as any of Overwatch’s fighters, and balance here is key. Just like you need a Mercy or Zenyatta to ensure victory, so too will Lifeline be a vital part of any team. If you’ve not yet tried a Battle Royale, Apex Legends is an excellent place to start.

Since launch, Paladins has deflected accusations that it copied Overwatch. For starters, it draws far more inspiration from MOBAs than Overwatch does, which steers more in the direction of objective-based shooters. There are heavy similarities between the two games’ heroes, sure, but Paladins’ concept art existed way before the public ever knew about Overwatch. Whether or not Hi-Rez studios copied Blizzard’s homework, there’s a lot here to like. Character customisation through a 'card' system provides opportunities to be creative across much larger maps. Fights feel more tactical, with Paladin characters generally doing lower damage with higher mobility. This results in edge-of-your seat confrontations that last minutes, instead of Pharah’s rockets nuking you in two strikes.

Brink launched back in 2011, and it’s clear in retrospect that it was way ahead of its time. It brought class-based, high-mobility shooters to the market when Overwatch was still a twinkle in Jeff Kaplan’s eye. With servers that can support 16 players, Brink has four character classes to choose from (Soldier, Medic, Engineer, and Operative) that each possess their own unique set of skills to go all Liam Neeson on the enemy. Here in 2019, Brink’s fairly long in the tooth - but now it’s free to play on Steam, you’re not risking much by giving it a try.

Block N Load is a mash-up of Minecraftian block building and class-based competitive FPS-ing. Here you can use your experience with Overwatch’s team composition to balance your player abilities and ensure a strong mix of offense and defense. Each stylish character has biting one-liners, just like the barbs traded between the likes of Junkrat and Reaper. The key difference lies in the beginning of each match: in Block N Load, both teams spends five minutes at the start building their base to protect a Generator Cube. Lose the cube, and your team loses the match - a bit like Overwatch’s Control Points.

Warframe is serious multiplied to the power of Christopher Nolan’s Dunkirk. Its lore is deep, chronicling an eternal war that’s torn apart the world. You play a Tenno soldier, fighting to bring peace across maps that are far darker and grittier than the cartoonish colours of, say, Junkertown. This free-to-play shooter offers a fair bit more than other games like Overwatch with an open world and complex story missions alongside multiplayer. But the skills you’ve sharpened in Overwatch working as a team to complete objectives will be vital in Warframe’s PVP modes. The community here is incredibly friendly, keeping up-to-date wikis of the best strategies and even giving genuinely helpful advice in the global chat. Warframe is a great jump for those who want something a little grittier, but still fun.

Dirty Bomb is another objective-based shooter, where one team completes a series of objectives – go here, blow up this, steal that – while the other team tries to stop them. Also like Overwatch, Dirty Bomb is built around a class system with a roster of heroes you’re encouraged to swap between. The game encourages run-and-gun tactics with frenzied choke points that require hefty firepower to blast through. It’s not the most original game on this list, but Dirty Bomb is a solidly made free-to-play shooter that requires players to work together to win. The only shameful eyebrow raiser is its occasional toe dip into pay-to-win mechanics.

Destiny 2 is probably the furthest from games like Overwatch on this list, but is worth checking out for those that love cooperative play. Destiny’s rich universe is filled with PVE opportunities, but it’s the PVP Crucible where you can start putting your Overwatch skills to good use. Here, communication is key to stealing objectives, taking out enemies, and ensuring you have a good mix of Destiny’s three classes: Warlocks, Hunters and Titans. This trio of flavours aren’t quite as rich as Overwatch, but come with sets of subclasses that allow for a touch of customisation. If you’re looking for another game to get lost in with a pal, you won’t go far wrong with Destiny 2.