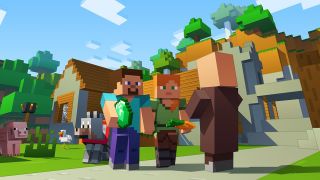 Minecraft: the game which popularised the open-world survival-and-crafting genre still remains one of the most popular video games in the world, and ten years after its official launch, millions of us are still indulging in its blocky thrills. It was even the most viewed game on YouTube for 2019, with over 100 billion views across the site! Yet for some veteran miners and crafters, all that time digging diamonds and dodging creepers might be getting a little stale. So if your pick arm is getting tired after a decade of digging and you’re looking for something fresh, why not check out our list of the best games like Minecraft that you can (and should!) play right now:

The Forest drops you in the middle of the wilderness (quite literally: you crash a plane) and forces you to craft weapons and shelter to survive against an apparently nocturnal tribe of cannibals. It's totally like playing Minecraft - if Minecraft's creepy hissing spiders were bloodthirsty savages trying to eat you. However, if the screenshot above wasn't clear, The Forest is far scarier than Minecraft would ever want to be. There’s a real Green Inferno vibe underscoring the whole thing, what with you being lost in the wilderness scavenging for food, building shelter from the weather, and fighting off aggressive club-toting mutants. Not for the kids.

In its ridiculously popular online sandbox, Roblox lets you create just about anything that you can think of. Want to build a massive skyscraper only to watch it blow up in spectacular fashion, or host a disco party complete with flashing lights and an on-stage DJ? Go for it. The world is yours to do what you will with it, and the possibilities are endless thanks to the game's intricate editing tools. Roblox puts a huge focus on the social aspects of building and dismantling with friends, with virtually everything in the world created by the players (and there are a lot of them, with over 100 million active users as of 2019). Try it if Minecraft is a bit too solitary for your liking.

If it wasn't for the realistic in-game water, you'd probably mistake Terasology for Minecraft itself. The game has all of the aesthetic elements of Mojang’s original trend-starter, right down to the blocky hands and punchable cubes of dirt. However, Terasology is an open source game, so if you’re someone who likes to dive right in and contribute to the development and expansion of a community project, it’s a win-win scenario. Aside from the world destruction and building elements of Minecraft, Terasology does boast its own unique features, including the ability to build up armies of loyal minions to defend your works. The game is under constant development too, so there's no telling how it might change in the future.

As in Minecraft, many a tree will be slaughtered on your way to building shelter when first starting out in the 2D world of Terraria. But it’s a necessary sacrifice, as there are things that go bump in the night in this world - things that would very much like to slay you, actually, even as you try to figure out what to do with your steadily increasing pile of natural (and supernatural) resources. Thankfully, Terraria gives you more options when it comes to disposing of the encroaching evil with a greater emphasis on combat and unique items; and crafting is more than just a means of security against the persistent dangers of the world, conquering the world’s bosses and dungeons along the way. With the game’s last major update, Journey’s End, scheduled for release in 2020, there’s probably no better time to play.

Although it's a strategy game, Castle Story’s strong focus on tactically overpowering your enemies doesn't mean you won't also be building all manner of structures in the process. The need to partake in mass deforestation is also a shared trait with Minecraft, but it’s all for a good cause; that good cause being an impenetrable castle entirely made out of wooden blocks. The extra spice in Castle Story's gameplay comes from getting to design your own defences, in what quickly turns into a wonderfully addictive marriage of creativity and tactics.

With all the large-scale construction going on, it’s easy to forget that Minecraft features the chance to indulge in the underrated joys and small victories of owning and caring for a garden, or even a full blown farm. Stardew Valley is an entire game which revolves around that very same idea. That said, there's quite a bit that sets it apart. In Stardew Valley, players can get to know their local community of fictional characters, and even spark up a romance with some of their neighbors if they want to. The game also takes inspiration from the likes of Animal Crossing and JRPGs as much as it does Minecraft, and that hybrid nature keeps it from leaning too heavily into one single genre.

While “Minecraft with dinosaurs” is probably a little too reductive of a description, it certainly gives you an idea of what to expect from Ark: Survival Evolved. You gain consciousness on the beaches of a mysterious island chock full of Jurassic beasts, but it’s not long before your skills in crafting and combat come in handy in the quest to become king of the jungle. Ark is a game obsessed with Darwinism and the hierarchy of nature. Start as naked prey, become an apex predator. The game slowly becomes less of a survival experience and more of a power fantasy, emulating the concept of evolution in a way that few other titles have.

With a name like Robocraft, it’s clear what this online robot battle brawler was inspired by. Construct your bot from a dazzling array of block-based components, and unleash your creation to clobber it out on futuristic alien worlds. There’s an impressive array of possibilities in what you can build too, from flying machines to tanks to a replica Batmobile. Although the construction screen may be a tad complex for beginners, the game’s tech trees mean that you’re not immediately overwhelmed by blocks. Robocraft has an impressive array of guns for your battle bots, letting you fight in a variety of ways; and additions such as shielding and cloaking mean that your creativity is the only thing holding you back from creating the ultimate blocky bot.

Cube World has its roots in crafting and character progression, and takes place in randomly generated worlds full of blocks as far as the eye can see. There’s a strong focus on cosmetic customization, with characters able to modify their armor and other wearables for the sake of fabulous self expression. But Cube World cribs from games like The Legend of Zelda too. Inspired by such exploration-heavy games, Cube World gives players an arsenal of skills to better help them trudge through the endless world. Choosing a class and specialization for combat turns the game from a simple exploration simulator into a meaty RPG adventure, packed with missions, bosses, and creepy caves to explore.

Trove is a voxel game, so its resemblances to Minecraft are immediately apparent, at least from a visual point of view. Trion World’s action-oriented MMO features mines and caverns crawling with enemies and the promise of untold rewards, letting players team up with friends to progress their character and conquer Trove’s sizeable to-do list. However, Trove is more concerned with being an MMO than a Minecraft clone, with its extensive range of classes designed to facilitate and encourage variation in playstyle. Its employment of loot, bosses and dungeons again draws from the well of RPG tropes to deviate from the conventions of its aesthetic inspiration.

Turn to page two for more of our pick of the best games like Minecraft...