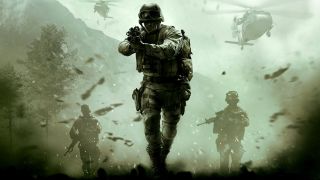 They say if it ain’t broke don’t fix it, and for the longest time the Call of Duty mega-franchise didn’t receive so much as a lick of glue. With an unchanging formula, it became the benchmark to measure any game that fired a gun against and dominated charts as the ultimate first person shooter from 2003. But fast forward a few years and there are now many other options on our shelves for those looking for new challenges and a fresher face. Here are 10 games like Call of Duty for anyone looking for a shift of scene.

Available on: PS4, Xbox One, PC, Android, and iOS

Any battle royale could have kicked off this list, but Player Unknown: Battlegrounds gets the top spot as the original and most gritty. If you favoured sniper weapons in COD multiplayer, then you’ll be well at home on PUBG’s sprawling maps. You parachute down to land with 99 other players and battle it out until only one of you is standing. This is free-for-all turned up to 11, though you can buddy up with pals battle it out in small groups if team co-op is your thing. Black Ops 4 even copied the formula in 2018 by introducing its own spin on the genre, Blackout.

Take Call of Duty: WW2, feed it Popeye’s spinach, and you have Battlefield 5. EA Dice’s first-person shooter tells the story of the Second World War through the eyes of the soldiers themselves in a stellar single-player campaign mode that’s as emotional as it is compelling. Battlefield’s multiplayer mode is where it truly strikes new ground though, with sprawling maps that cram 64 players into combat. One minute you might be an infantry soldier pushing towards enemy lines, the next you take control of a WW1 fighter jet and rain down cover fire from the sky. Strategy is vital here, making Battlefield 5 a must have for those who reject spray-and-pray tactics.

If you’ve never heard of Counter Strike: Global Offensive (aka CS: GO), welcome back! We hope your nine year trek through Antarctica was fruitful, and your reconnection with civilisation has been smooth. Your first task now should be to play Valve’s iconic multiplayer shooter. Since release, it’s become one of the eSports heavy hitters with tournaments that draw crowds of millions. No wonder, really, since it takes COD’s close-quarter combat and strips it of all fluff. There are no double jumps, wall runs, or laser guns here. The only way you’ll win CS:GO is with sheer skill and determination honed through match after match.

When Overwatch first launched in 2016, it was a revelation. The first-person shooter mixing MOBA elements with exquisitely designed maps and modes has dominated charts since release. Some of the key selling points are its characters. It has one of the most diverse hero rosters in any game, both in terms of backstory and ability. The latter, however, is what gives Overwatch such great replayability. Every hero has a unique playstyle that requires careful mastery, like Pharrah’s aerial rockets or the balancing act between Zarya’s particle and projected barriers. There are 30 characters currently available, meaning you can spend months perfecting each one.

Read more: Games like Overwatch to play next because heroes never die

The first Titanfall did well, but it was Respawn Entertainments outstanding sequel that truly made it a COD contender. Titanfall 2 builds on the foundations of its predecessor, adding a cleverly written single-player campaign and sharpening its multiplayer shooting mechanics. The series meshes traditional firefights with giant mechs that players control to dominate the field. This creates truly unique strategies where you must balance the raw power of mech fighting with the fluid freedom of running around outside your unit. Don’t forget, Titanfall 2 is the world that spawned Apex Legends, so expect big things.

Available on: PC, and Xbox One via backwards compatibility

Dubai’s gleaming skyscrapers and pristine beaches have been battered by a catastrophic sandstorm, burying a once-great city and trapping its citizens. Your job is to go into the ruins and rescue as many as you can - but it won’t be easy. Feral gangs dog you every step and natural disasters strike frequently. Spec Ops: The Line draws heavy inspiration from Joseph Conrad's novella Heart of Darkness, so expect some weighty morality decisions. If you play Call of Duty for its multiplayer Spec Ops won’t be a strong swap, but the single-player campaign here is a true must-experience for narrative fans.

Available on: Xbox One, and PC

Once upon a time, Halo was Call of Duty’s biggest contender. The sci-fi shooter dominated Xbox when the alien ray gun was but a twinkle in Treyarch’s eye, and offered an epic story centering around a brutal war between humanity and an alliance of aliens known as The Covenant. Plus, it birthed one of the most iconic video game characters of all time, Masterchief. Fast forward to present day and there’s a new game on the horizon, Halo Infinite, but before that releases you can’t go wrong with Halo 5: Guardians. It brings the best multiplayer combat in the series to date.

A month after Black Ops 3 hit shelves in November 2015, Rainbow Six Siege released. But while Call of Duty players eventually moved on to the next COD instalment, Rainbow Six Siege’s player base has expanded to over 25 million. It constantly updates with new free maps, building off a solid base game that tasks players with fighting as either terrorists or counter-terrorists. Terrorists play defence, counter-terrorists must infiltrate their territory and take all enemies out. Rainbow Six enjoys a regular flow of new DLC that shake things up just as they’re becoming slightly stale, ensuring this is a game you can master and still find enjoyment from years later.

Some of the best games take their inspiration from outside of the industry, and the Metro series is a great example. Based on novels by Dmitry Glukhovsky, the series takes place among the devastation of a global nuclear war. The survivors fled underground to form new civilisations in the worlds metro tunnels, but the latest instalment Metro Exodus allows players to venture back up to the surface. There’s no multiplayer campaign, but you can test your shooter skills honed in Call of Duty throughout Metro Exodus’s excellent single player story. The focus here is exploration and stealth, so if you’re looking for a change of pace, this is it.

If you’ve got kids - or have found yourself tasked with entertaining kids for longer than ten minutes - Splatoon 2 is a vital parenting instrument. The Nintendo-exclusive third-person shooter is a kid-friendly take on the multiplayer genre, swapping out bullet loaded guns with ink spraying pistols. The actual gameplay modes are fairly similar: take out enemies, claim territory, and steal resources, but the paint mechanic completely shakes things up. Spraying the environment is as important as splatting enemies, creating interesting new ways to play even for adults that just want something different from Call of Duty’s monotone maps.