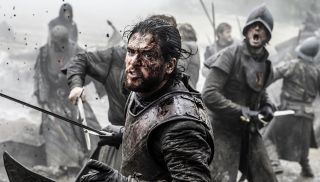 Warning: spoilers for Game of Thrones season six ahead

The ninth episode of Game of Thrones season six finally delivered on the promise of an epic showdown between Jon Snow and Ramsay Bolton. "Battle of the Bastards" served up an hour of spectacular viewing, pitting the two rival leaders and their sizeable armies against one another. It has one of the best fight sequences ever seen in the series, a sprawling, bloody affair ending with Jon Snow's victory over the other Northern bastard.

Part of its effectiveness is down to the blend of practical and visual effects; something the show does so well that it's hard to tell where one ends and the other begins. That'll be the work of the VFX team Illoura, who posted a breakdown reel of the episode showing how the battle came to be:

Wait, so those horses.... are digital? It does make sense. You can't have loads of riled-up horses charging around whinnying in every direction and expect them to respond as scripted. It's damn impressive seeing how they're built up from skeletons to fully-fleshed creatures.

Aside from the equine element, it's surprising that most of the content you might expect to be costly practical effects are actually CG. Those thousands of extras, for example, were only a few hundred and tweaked in post-production to make their numbers appear much greater. It's highly likely we'll be seeing more of this technical genius in the final two seasons - when the White Walkers finally break down The Wall.