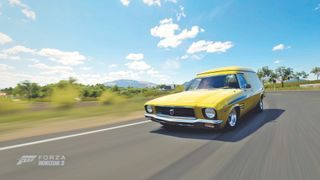 Benjamin Penrose, art director on both Forza Horizon 3 and 2, is a romantic at heart. This may seem paradoxical considering those two racing games primarily encourage you to tear through cities and around the countryside at a rate of many somethings-per-hour in hypercars, wilfully smashing through fences and trees. Romance isn’t so much dead as flattened and covered in burnt rubber.

Forza Horizon 2 is set in a squashed version of the Mediterranean, the French and Italian countryside warped and remixed to fit for entertainment’s sake. Forza Horizon 3 is set in an even squishier version of Australia – the world’s largest island (where I live) swallows those two countries seven times over. Each has a hit list of iconic settings, destinations and landmarks to include as it aims to capture each location’s unique nature. That’s a lot to fit into an Xbox One game.

Being an art bod, it was Penrose’s job to show all that off, wrapping the locales around an energetic racer that offered cars to die for and compelling reasons to mash the accelerator flat to the floor. He’d been poring over feedback from the Xbox 360’s Forza Horizon and, in his words, “became obsessed” over a single-word description of the game: beauty.

Open-world Need For Speed spends its time careening around industrial yards and chemical works, the antithesis of what you see in any Forza Horizon. Treachery, he said, wasn’t what they were going for. Instead, they wanted “descriptions of lush verdant fields, different colour hues of rocks,” and “naturalistic representations of the landscape”. In fact, the historic Amalfi coast inspired Monet’s famous paintings. It’s there, in Forza Horizon 2.

So when I spoke to Penrose in the weeks leading up to Forza Horizon 3’s launch, I asked him if ‘naturalistic representations’ were still his ethos. Yes, of course, and one image that the team captured of Australia and recreated for their concept art that stood out to him: the Twelve Apostles, a natural rock formation in the state of Victoria which anchors the Great Ocean Road. No cars were in view, just the beach, rocks and a seagull skipping across the sand.

All of the other imagery – the red centre, cities and rainforest – flows out from there. Fire up Forza Horizon 3 and the first drive you take rockets you down the Great Ocean Road, past the Twelve Apostles. What’s incredible is that Horizon 3 has made me appreciate the places I’ve travelled to even more, from the simple Coalcliff Bridge to the burnt hues of the Outback. (Sure, the map makes no sense when compared to the real thing, but getting hung up on that is a fool’s errand.)

You can’t have a racing game without cars, and Horizon 3, more than other racers, is a time capsule for Australian motors. All three Australian car manufacturers – Toyota, Ford and Holden – are shuttering this year. For many Australians this is still unfathomable, and yet the final hero cars of each – respectively the Camry, Falcon and Commodore – have already rolled off each production line. While Toyota’s family-sized shopping trolley holds as much cultural cache as your uncle’s Vauxhall Cavalier, the Falcon and Commodore are mainstays, especially in local motorsport.

I’m amazed it’s taken this long for Australian cars to feature in racers, so it’s bittersweet that it comes at a time when the local manufacturing industry is winding down. However, a recent patch accidentally pushed the dev-only build of the game out to PC owners, and it showed off a tantalising clutch of upcoming DLC cars. Porsches and rally heroes aside, a VK Commodore was also in the mix. It’s boxy and ugly, but ultimately legendary thanks to its success on the racetrack in the ‘80s. I can’t wait.

I’ll leave you with a recommendation. Turn off everything in the HUD, kill the music, grab the Holden Maloo or Ford Falcon Ute, and go driving in the near chase cam. Skirt around the map and admire the shifting skies. Playground had a huge canvas on which to paint, and it’s covered it spectacularly.

Want more? Here are the best Xbox One steering wheels - perfect for Forza.

Editor of OXM Australia, usually sitting forward, white-knuckling whatever racing game's in my console. Or, staring into the abyss with the latest rogue-like, and when I'm not doing that I'm changing the Y-axis to invert because, yes, thank you, now let's not fight about it.
See comments