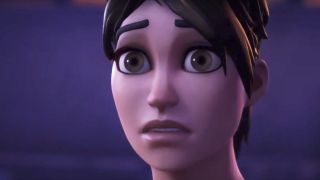 Hey, have you heard of this game called "Fortnite"? Yeah, pretty popular, I guess. And you know, I didn't want to be the only kid at lunch not talking about it, plus the Avengers: Infinity War / Fortnite crossover event that lets you play as Thanos is ending May 15. So I figured now was as good a time as any to jump aboard the hype train (or hype bus, as the case may be).

I installed the game on my Xbox One so I could give it a whirl. And what a whirl I would've had, if not for the following message which greeted me:

"You do not have permission to play Fortnite."

Oh. Well, who do I ask for permission? I started with the person I would historically ask, my mother. "You are nearly 30 years old and I don't even know what that is," she told me over the phone, her voice heavy and exasperated. "Why are you asking? Is this for one of your articles?" I hung up. Clearly I would need to get permission from somewhere else.

At least I knew I wasn't alone though, as evidenced by the Google search I performed:

Friends on Twitter pointed out that this error can pop up when your Epic Games account has previously been linked to other accounts. But that didn't seem to ring a bell. Maybe, without knowing it, I'd made a jump to an alternate timeline, or maybe I just didn't remember because I hit my head a lot as a child - but whatever the reason, I could not recall linking an Epic Games account to Xbox Live or PSN.

That said, I did have an Epic Games account - one I'd made earlier this year in an attempt to learn how to make games in Unreal Engine 4. Maybe that's where the trouble was?

I logged on and clicked on the "Connected Accounts" tab. There I found options to link my Epic Games account with my Twitch, Xbox, and PlayStation accounts. None of the buttons indicated that they were already connected, so I clicked on the Xbox option, and signed in with my Microsoft account. Or at least, I tried to, before being told that actually, I was wrong.

As had been theorized, the issue seemed to stem from a criss-cross mismatch between accounts. However, the important word that stood out to me here was "another." So even though I didn't (and still don't) remember making it, this phantom account was the source of my troubles. I've had several email accounts over the years, so I went through and guessed them all, one by one.

That's when I learned that no matter what email or password you type in, you get the same error message if both don't line up: "Sorry, the credentials you are using are invalid". This means that even if I had the right email but not the right password, I wouldn't know which was correct and which wasn't. My eye began to twitch.

After guessing every combination of password and address I could think of and getting nowhere, I used the "Forgot your password?" link to have Epic re-send my login info to each of my old emails. Why all my old addresses? Because, as it turns out, there's also no indication if an email has or hasn't been registered yet. I would have to wait and see which ones received a password reset email.

This is where my pain paid off, and can hopefully spare you the same headaches.

Thankfully, one such email did appear, and I was able to log in. I navigated to the Connected Accounts tab and, sure enough, Past Sam was holding my Xbox account hostage. I unlinked from this long forgotten Epic account (seriously, I still don't remember making this thing) and went back to my intended account.

In other words, if you are also experiencing the "You do not have permission to play Fortnite" error, double-triple-check any other emails you've used in the past to find out which one is currently linked to whichever system you want to play on. Unlink it, log onto the Epic Games account you do want it associated with, and connect the two there. And hopefully this all goes a bit smoother for you than it did for me.

In the end, it may have been a bit of an ordeal, but finally I could play this amazing game everyone has been talking about. I could drop in on my glider, pick up a weapon, and fight my way to the t-

And that's the story of how I resolved the "You do not have permission to play Fortnite" error. I had to dig through old accounts, make a few blind guesses, and solve the issue by process of elimination, but I did solve it. And so what if in the end it turns out I suck at Fortnite? I still had fun, and now I have things set up so I can play whenever I want.

Of course, now I've got this extra Epic Games account just sitting there. I wonder how difficult it would be to delete it?

If you're feeling spurred to check out Fortnite, be sure to check out our Season 4 Battle Pass Challenges guide, as well as the Fortnite Tier 100 Challenge guide.