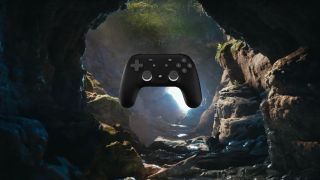 Google just revealed its vision for the future of gaming, and it's called Google Stadia. A games streaming platform that will allow you to tap the massive power and reach of Google's global data centers, Stadia promises to deliver games on practically any device at resolutions up to 4K and frame rates up to 60 FPS. Paired with Google's proprietary controller, Stadia will leverage cutting edge streaming technology and a suite of developer-friendly features like state sharing, which will allow users to trade what are essentially in-game save states like those in emulators to show off progress or challenge their friends.

It's an idea that's been a long time coming, already implemented by tech giants like Sony and smaller companies like Shadow, but today's keynote ending up raising more questions that it answered. It's possible that the real future of the platform, and maybe of gaming as a whole, is visible through those holes, so we rounded up some of the biggest lingering questions about Google's ploy to unseat Xbox and PlayStation from their cozy gaming thrones.

A lot of the Google presentation was light on details, and nowhere was the company more vague than about the Stadia's games library. Back when it was called Project Stream, Stadia showcased that it was possible to stream Assassin's Creed Odyssey reliably and consistently on some very limited hardware, so clearly the tech exists to support modern AAA titles on Stadia. That said, the only developers that appeared on stage to talk about upcoming projects for Stadia were pretty niche, and obviously very early in development, other than id's announcement that it is bringing Doom Eternal to Stadia (though not whether it would launch concurrently with release on other platforms).

The success of any new gaming platform hinges almost entirely on the library of games it can deliver, particularly exclusives that won't appear anywhere else. If Google wants Stadia to avoid sharing a shallow grave with the Ouya, it needs to provide a library of games at least on par with current generation consoles, and ideally also shell out some cash to secure some attractive platform exclusives from some pedigreed studios. Google has said it's released 100 devkits to developers, but how many of those kits are put to use making games, and how many of them are high quality and see wide release, remains to be seen. It'll also be fascinating to see what kind and quality of games Google's own first party studios, Stadia Games and Entertainment, will produce under the leadership of industry alum Jade Raymond.

Another huge axis the success or failure of Stadia will turn on is price. As we saw with the PS3, or even the price margin difference between the PS4 and Xbox One, gamers are definitely susceptible to sticker shock. Will Stadia be a subscription service, or will you buy and play games à la carte? Will the controller be priced comparably to controllers for current consoles, or will it see a big price mark-up because of all the tech packed into it and the fact that it's effectively a console replacement?

Google has emphatically stated that there will be no box or traditional hardware platform of any kind, and that any USB controller can be used with Stadia. So how is it making money? And if it is a subscription model, will it hew closer to something relatively affordable, like the Netflix model, or something more premium, the way games are priced compared to films.

Given Google's (and most giant tech firm's) suspect track record on privacy, one of the major concerns around Stadia will naturally be how it collects, uses, or sells your data. It's possible that the service itself will be reasonably priced and that one of the major way Google recoups its money will be through the harvesting and sale of consumer's data. There are certainly a huge number of Google's partners, many of whom they mentioned by name on stage, who would be very curious about your exact play habits and lifestyle, particularly game publishers and other hardware manufacturers.

Our game playing habits are one of the few trajectories of data that Google doesn't currently have a model in place to collect, but Stadia will certainly change that. Other than briefly mentioning security in a very nebulous way on the keynote stage, the presentation was largely devoid of any information that would reassure anyone paranoid about data privacy.

4. What kind of internet connection does Stadia require?

Another notable absence from the Stadia keynote was any information about internet speed requirements. While its beta predecessor, Project Stream, required a fairly scant 25Mbps it also was only capable of streaming games at 1080p resolution. With Stadia promising 4K resolution, with future titles potentially reaching 8K, the internet requirements are likely to be significantly higher.

But how much higher? And what happens to your game state if you briefly lose connection, or if there's a server crash on Google's end? Will loss of progress be determined largely on a game-by-game basis, or will Google have fail-safes in place that will ensure you don't lose huge chunks of time if your internet disconnects or you get booted off Stadia's service? These, and bigger questions about reliability, will be massive determining factors in whether or not Stadia fizzles and fades or sees wider adoption.

Phil Harrison, formerly of PlayStation and Microsoft, announced during the keynote that Stadia would launch in 2019 and would be available first in the US, Canada, the UK, and parts of Europe. Beyond that, however, the precise launch date is still very much fodder for speculation and, as gamers are more keenly aware than most, the first launch date a company announces is by no means final. With a virtually bare cupboard of announced launch titles, I have some serious concerns about what Stadia's launch lineup will look like and how far along titles being developed specifically for the platform are.

While I expect Stadia to collect a number of ports from other platforms for launch, I'd be very surprised if Google wasn't planning on leaning into at least a small handful of exclusives to entice early adopters. Given that it's already late March, I'd be very surprised if even Google's most optimistic plan wasn't for a holiday launch, and it remains to be seen if the platform and support will be ready by then. While I'm not necessarily predicting a delay into next year, I certainly wouldn't be stunned by one, either.