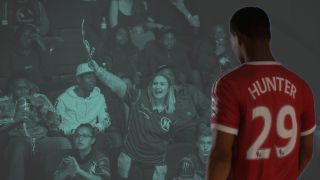 There's being able to beat your mates in your slightly hungover Sunday FIFA 18 tournaments, and then there's rising to glory as an esports star. That glory is one step closer thanks to Gfinity, the esports company that just snapped up the official license for FIFA 18. The game will join the Gfinity Elite Series esports competition in March 2018.

What does that actually mean for your FIFA skills? Players can register now to play in the Gfinity Challenger Series that starts on January 8th, and you don't need to already be a pro with a million subscribers on Twitch and one of those fancy gaming chairs. Prove your talents as a Challenger and you could be one of the top 40 ranked players eligible for the Elite Draft, taking place on February 23rd. It's like your own Alex Hunter The Journey story, but without the footballer salary. The FIFA eWorld Cup 2018 will take place next August.

"As we continue to engage millions of FIFA players in the community, and attract millions of viewers from all around the world, this year will be truly special as we see the best from the Elite Series on the Road to the FIFA eWorld Cup 2018," says FIFA Competitive Gaming Commissioner Brent Koning.

Gfinity has already had esports success with CS:GO, Rocket League and Street Fighter V tournaments, and with its worldwide audience FIFA 18 is sure to be a massive addition to the competitive family.

“FIFA is one of the most requested games by our teams, players, and fans and we will create very engaging competition and content for our community," adds Gfinity boss Neville Upton.

"The Elite Series is growing rapidly week-on-week and the addition of FIFA 18 will only help to accelerate this growth.  The upcoming season of Challenger Series is set to be the most competitive to date as we welcome new pro players to the tournament.”