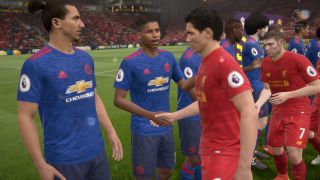 EA has finally added the new Premier League branding to FIFA 17, by way of a patch which should auto-install when you start the game on PS4, Xbox One or PC.

The Premier League switched to all-new logos in the summer, too late for them to be included in the game – meaning pre-match line-ups and in-game scoreboards all used generic designs. That's all changed, with top flight English matches now adopting a block-based – and lovely-looking – white, purple and turquoise colour scheme.

Those aforementioned team line-ups are now much easier on the eye, and delivered like a true TV broadcast.

The chunkier fonts also serve to make everything on the HUD a touch clearer during actual gameplay. Obviously they don't affect things on anything more than a superficial level, but it's another step towards the total authenticity EA aims to deliver on the kits, badges, bells 'n whistles front. And, as I wrote in our review, that stuff matters.

Not bothered about presentation? There are some small tweaks to gameplay, too. According to EA's patch notes the AI will now "attack directly" on an increased basis, you'll see more errors come about from triple-tap crosses, and corner kick outcomes will be more varied thanks to revised goalkeeper positioning and "improvements to contested headers logic".

You can read the full list of changes, which also include minor amendments to Pro Clubs, career mode and Ultimate Team, on the official FIFA 17 website.