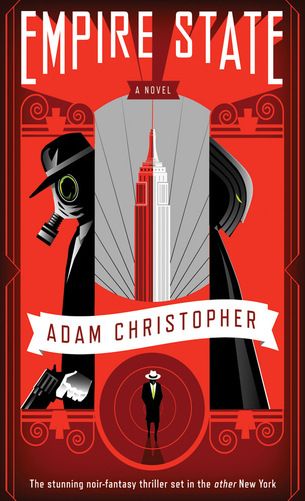 To paraphrase Dragnet , there are millions of stories in the Empire State – and Adam Christopher has tried to tell as many of them as possible within a single coherent narrative. The Empire State is a dim analogue of Manhattan, set in the golden age of superheroes, but the novel’s so packed with plot threads that the superheroes are practically a background detail.

We mostly follow Rad Bradley, a private detective who detects the existence of a parallel universe. But that’s just one of several mysteries which unfold. Who runs the Empire State? What’s going on with that weird religious sect? What happens to all the Cybermen-like steampunk soldiers the city sends off to war? And who are they fighting, since as far as everyone in the city knows, there are no other places?

After an explosive start, the novel takes a little while to get going due to the accumulation of detail, but the world-building is done in a digestible way and Bradley is a sympathetic hero. The novel’s mounting chaos is authentically noir-ish and Christopher paints an effective portrait of a bleak, confused, subdued city.

Most impressively, the novel becomes more unpredictable as it goes along – the parallel universe stuff isn’t hard to work out, but the other mysteries gain in prominence, and the plot could be resolved in any number of ways. There’s possibly one twist too many as the climax arrives, but it’s thrilling stuff anyway.