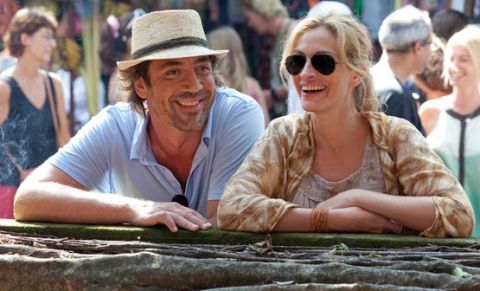 Eat Pray Love review - A career as a successful travel journalist, a swanky New York apartment and a post-marital fling with James Franco: things don’t appear to be going too badly for Liz Gilbert (Julia Roberts).

Yet still, she can’t find her “centre”. She used to have “an appetite for life” and she’s lost it. Woe. Woe is her. Clearly what this woman needs is a 12-month voyage of self-discovery around the globe.

Roberts’ character is difficult to feel sorry for before she sets off on this postcardperfect self-healing binge. She becomes near impossible to like as it becomes apparent we’re watching a huge holiday video.

You know those montages on A Place In The Sun that make everywhere look like paradise? There’s a lot of that.

Eat Pray Love sounds like a self-help solution before you get past the title, and Glee creator Ryan Murphy is indulgent with our time as well as the expensive location shooting: 140 minutes.

The original book – a memoir by the real Elizabeth Gilbert – has legions of fans, though. Those able to ignore the narcissism of it all will simply relax into Roberts’ leisurely gallivanting.

They’ll enjoy the colourful charismatic types that surround her: Richard Jenkins’ grumbling semi- Buddhist musings; a Balinese guru issuing mantras like a shrink with a prayer mat; Javier Bardem knocking her off her bike then falling in love with her.

On some levels, it’s just easygoing tourism: a cinema-priced round-the-world ticket. But the introspection, accompanied by a voiceover as well-suited to a PowerPoint presentation as a movie, goes on and on as Roberts seeks her “balance”.

By the time she lands on a theory she calls ‘The Physics Of The Quest’, you’ll wish you were homeward bound.