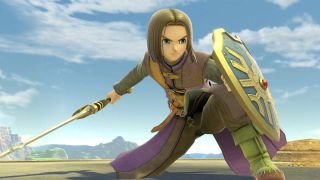 Nintendo blew the lid off the hype roof after announcing that both Banjo Kazooie and a few of the protagonists from the Dragon Quest series would be coming to Super Smash Bros. Ultimate at E3. Both fighters looked amazing, but we didn't get solid info about when they would be released.

That may have just changed as Nintendo dropped a greatest hits trailer of all the new games they have coming out this month. Dragon Quest's Hero is prominently featured. Check the video out right here:

The trailer clearly says "Fighters Pass, Hero Joins the Battle" meaning that Hero should be dropping into Ultimate sometime in the next two weeks. We're already halfway through July so there isn't much time left for new characters to get added this month.

We don't have a complete breakdown of how Hero works in Ultimate, but the launch trailer at E3 showed them fighting with a blade, shield, and projectile. He also had an interesting JRPG menu command that lets players select special moves that can put enemies to sleep, among other things, by using drainable mana. It feels strangely familiar to Shulk's ability menu that showed up in Super Smash Bros. Wii U.

When Nintendo first announced the Fighter Pass they said that all packs would be released by February 2020. Their official site says Hero is coming this Summer and Banjo is coming later this year in the Fall. Each new pack comes with one fighter, one new stage, and additional music.

Looking for some tips to use when jumping back into the fight? Check out our 12 essential Super Smash Bros. Ultimate tips to know before you play.