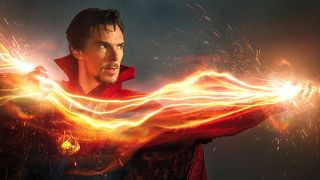 Doctor Strange isn't even out yet in North America and talk has turned to a potential sequel. While those who dug the flick are eager for another jaunt into Marvel's trippy world, according to its director there's no guarantee we're even getting a Doctor Strange 2. Why? It's all about the money.

“I’d be very interested in making [Doctor Strange 2]," Scott Derrickson tells Yahoo, "but we gotta see how this movie does first, you know? Can’t put the cart before the horse. I hope it does well and I hope there’s going to be a ‘Doctor Strange 2’, I certainly want to see that.”

If the film's end credits are to be believed then we're definitely getting one. The words 'Doctor Strange will return' roll by before the screen cuts to black. Now, this is Marvel we're talking about, so it'd be easy to assume that refers to the sequel. But Derrickson flat out says that single sentence is actually referring to his return to the MCU. You know - for Avengers: Infinity War.

We know that superhero megajam (yes, that's what I'm calling it) is packed with major MCU players. Avengers, Guardians, Ant-Man's crew and the Doc are all confirmed. That stacked cast might be why certain rumors began swirling about the formation of yet another superhero group: the Illuminati.

In the comics they consist of a bunch of important Marvel universe players, all of whom represent a specific section of that universe. There's Strange, Tony Stark, Black Bolt (of the Inhumans), and others who can't appear because Fox owns the rights.

That doesn't mean the rumors are false. When asked about the possibility of the Illuminati Derrickson doesn't shoot it down; “I think I’d like to see that. I think that that part of him and his future development becomes very interesting in the comics, but that all falls under the guidelines of Kevin Feige, he’s the Sorcerer Supreme when it comes to the chess board of how these movies fit together.”