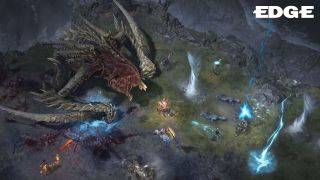 "There are no clean victories in Diablo," Diablo 4 executive producer and Blizzard co-founder Allen Adham tells us. "The world is not your typical clean world where the good guys always win and evil is always vanquished." He's not wrong: the demo we play is grungy with blood, pus and other assorted bodily fluids. Within the space of 20 minutes, we see a cursed young boy choke to death on his own vomit, the reanimated corpses of waterlogged humans pushing their faces through the mud and a Druid rip a rotting corpse in half like so much wet tissue paper. It may still have that distant, isometric camera keeping you above the action, but Diablo 4 wants to make you feel like you're right in the middle of the fray.

"What people did like about Diablo 3, we've still got in here," senior producer Tiffany Wat says of the carnage. "There's hacking and slashing and blood flying everywhere – we've updated our engine so we've got layered animations and death kits which means that, depending on how you kill monsters, that's how their body falls apart." Delightful – for die-hard Diablo fans, at least.

Diablo 3 was a tad controversial among seasoned demon-slayers. Its bright, popping colours, generosity with loot and (relatively) cheerful disposition somewhat alienated those players who came to the game hoping to be horrified, bullied and beaten senseless. People stuck around for the combat, more dynamic and intuitive than ever, but were left cold by the world.

'Classic' Diablo, as any fan will tell you, attracts true gaming masochists. Luckily for them, Blizzard is feeling much crueller these days. "If you decapitate enemies, heads fall off. If you're a Sorceress using a flame spell, you just roast all the meat off their bones. Or you can freeze them and see them shatter into a million pieces," Wat enthuses.

Even when observing from our God's-eye view above the action, we feel like we're down fighting in the trenches with our charges. The new engine Blizzard has devised from the ground up for this game layers on a day-night cycle and weather effects; new lighting tech means that if it starts to rain during battle, light bounces off the rippling puddles accumulating around you. The intense, challenging combat of III is now back where it belongs: in the kind of dark, brooding world that inspired so much dread in Diablo 2.

"One of the challenges we had in making this game was staying true to Diablo, Diablo 2 and Diablo 3 while pushing what all of those games stood for to the next level," Adham explains. "But I think we managed it – look at what we've done with the class refreshes. We took the Druid from Diablo 2 but brought it back even better. Now he's flanked by wolves, and shapeshifts into the werebear, the werewolf. And because it's Diablo, we dial it all the way up to 11, too – we have shapeshifting, but we also have crazy nature spells to complement that."

True to Adham's words, our time with the Druid leaves us giddy: we tear through the undead as a slavering bear, but can also cast a spell that summons wind so ferocious it pulls their skeletal bodies limb from flayed limb. We feel overpowered, as you would if you could turn into a bear at will – imagine the pub fights you'd win – but, crucially, not immortal.

The skill rune system from Diablo 3 is gone, with the systems from earlier series entries returning, letting you improve your abilities (and they'll gain new effects through levelling up) by spending points. Layer the more social MMORPG setup on top of that – while dungeons will still be private instances you share with friends, Diablo 4 features shared- world events that pit you alongside strangers in battles against bosses – and you've got a game positioned to take on anything from Destiny 2 to World Of Warcraft.

"The implications of this big, social, connected open world... that's something you're going to understand more as you play," teases Adhan. "The tech that allows us to run a massive open seamless world, and what that allows us to achieve, is an order of magnitude greater than anything we've ever done in Diablo before."