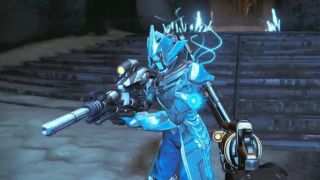 Destiny's Age of Triumph event is basically a "Greatest Hits" collection for all of your old glories, and no glory is greater than showing off sweet new armor. Bungie's third and final preview stream for the upcoming event was a fashion show for the five fancy new armor sets coming to the game in Age of Triumph, all ornamented up for your viewing pleasure.

The first four are all themed after the raids, while the fifth is a special set that the Speaker will award you for doing a new questline.

Here's the Vault of Glass set

This is the Crota's End set

Those spiky green bits retract as you get hurt.

And the King's Fall set

This is the Wrath of the Machine set's final form

Little panels light up so it looks all nice and glitchy.

And a raid-agnostic Guardian set

Is that Chroma you see there? Oh yes.

Aside from the fifth set, you can earn all of those pieces of gear by opening Treasures of Ages. Those are the new Age of Triumph loot boxes that also include gear from previous events. And make sure you play the weekly featured raid playlist to earn the ornaments you'll need to get them looking as fancy as possible.

You can start your final Destiny armor collection when Age of Triumph begins on Tuesday, March 28.